Part of the trial against the defendants. (Roya) 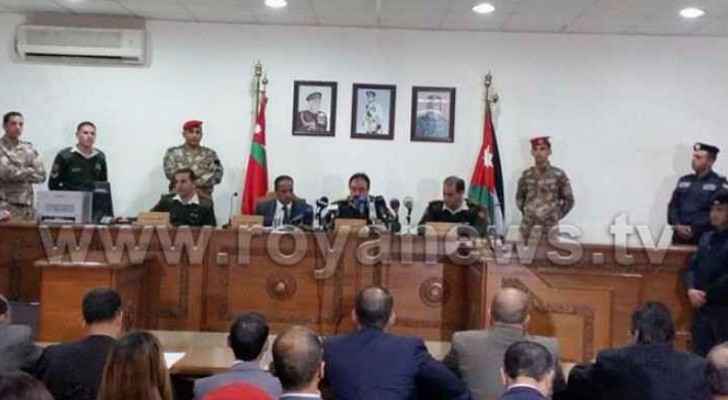 Jordan’s State Security Court has sentenced a Syrian man to death for having ties to the June 2016 Islamic State (ISIS) suicide attack on Rukban camp along the Jordan-Syria border.

The main defendant was sentenced to death by hanging. He is one of five Syrian suspects who have been detained since February 2017, accused of carrying out "terrorist attacks" and possessing explosive materials.

The sentences were announced during a public hearing held by the Court on Monday.

The defendants were arrested after seven were killed and 14 injured when an explosives-laden truck was detonated at an army post near Rukban, along the Jordan-Syria border. The dead and injured were border guards and officials of the public security department.

The suicide bomber drove out from behind a berm and evaded gunfire to reach the post, according to army said. Following the attack, the area was declared a closed military zone, disrupting aid to tens of thousands of Syrian refugees stranded along the border.

“Such heinous terrorist acts will only make us more determined to carry on with our fight against terrorism and its groups who plotted in the dark against the men who protect the country and its borders,” Jordan’s King Abdullah II noted at the time.

An estimated 50,000 Syrians live in a 3-year-old desert encampment, hundreds of miles from the nearest city and cut off from international aid workers in a closed military zone.