Jordanians leaving the site of an arsonist attack from conservatives on a Halloween party in 2012. (Photo Credit: Al Ghad) 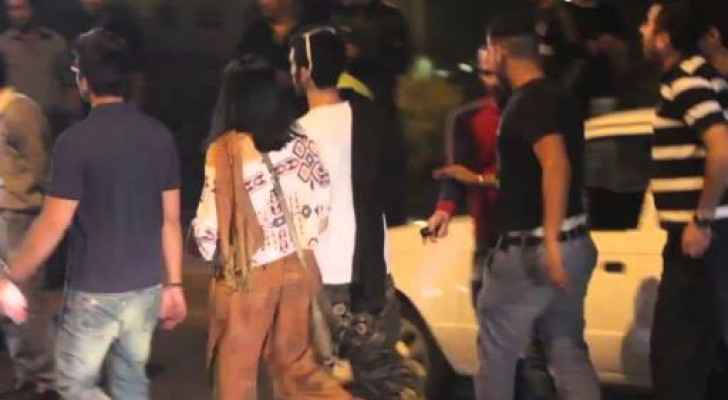 October 31st is little more than a month away, and here's what we might expect from Halloween this year:

Our history with intervention in public events is a trajesty - so far we've banned Mashrou' Leila (twice), hindered Kim Kardashian's visit to the country, and shut down pajama parties.

Most importantly however, Jordan has deprived its citizens of the sheer wonder of Halloween.

“We obviously have a state that is keen on appeasing conservative forces whenever it’s up against the wall,” wrote Naseem Tarawnah, co-founder of 7iber on his blog once.

“Jordanian society, as a whole, has grown more conservative and/or religious in recent years.” State opposition to "secular/liberal/western activities," he states, will always assert itself, and with Halloween this phenomenon is no exception.

Conservatives believe Halloween is a "satanic" and "homosexual" gathering which compromises Jordanian values, with its crackdowns seemingly done to appease Islamist groups.

Indeed, the Islamic Action Front has a tendency to nitpick inconsequential events as a means of differentiating itself by appeasing to its conservative base.

Over the summer, Dima Tahboub launched a campaign to shut down MyKali, which had already halted operations in 2016 due to social pressure that forced the government to appease conservatives.

Much like the United States has a failed war on drugs, Jordan has a failed war on Halloween. Conservatives tend to focus on fearmongering and appeasing actions rather than a solid base of policies which benefit the Jordanian public as a whole, becoming increasingly totalitarian in its policing of social activities.

Moral politics, according to political scientists, is a political party's low-cost strategy to gain public support to rallying against a perceived enemy of social, religious or moral values.

This is quite dangerous, particularly due to a lack of rule of law in the conservative campaign to control aspects of Jordanian social life. In 2012, Al Ghad posted a video depicting conservatives commiting arson on a celebration in Abdoun during Halloween. It remains unclear whether suspects were held accountable.

What remains clear however, is that the conservative call to control many aspects of Jordanian society prompts extreme responses from supporters against highly insignificant things.

In cases like this, we must acknowledge how fear-mongering politicians cause a spike in violence between civilians. The most prominent recent example is the election of Donald Trump, with his xenophobic, Islamophobic and hateful rhetoric against non-white members of American society.

The Trump Presidency saw a resurgence in the KKK and Neo-Nazis, with Islamophobic hatecrimes nationwide soaring, with 90% of people responding to a post-election survey saying they believe public spaces are becoming less safe.

Another powerful example is detailed in the film God Loves Uganda, which depicts moral politics in action in Uganda, resulting in the deaths and systematic targeting of hundreds of people as a means of giving political parties a differentiated edge.

This year, Jordan needs to focus on preventing divisions between the more conservative and the more liberal based of society from having violent interactions.

That means that parties like the Islamic Action Front must focus on the important issues, such as Jordan's economy, social benefits, infrastructure, refugees, and foreign relations, rather than petty Halloween parties.

Jordanians live in an environment of rising prices on commodities, with war plaguing literally every country on the Kingdom's borders.

Many believe that these gatherings are ways to cope with the increasingly difficult life we live in Jordan, with a strain on resources and constant barage of news detailing which terrorist attack occured where.

Trump celebrates first Halloween in White House with the ....

Islamic Action Front reach out to Minister of Interior ....

Islamic Action Front reach out to Minister of ....

Islamic Action Front reach out to Minister of ....

Islamic Action Front reach out to ....