New waves of displacement are expected as the battle inside the city progresses. 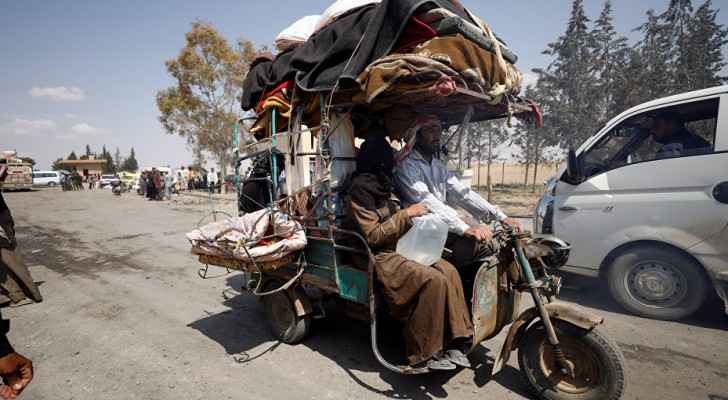 The battle to oust the Islamic State group from its stronghold of Raqa is creating daunting challenges for aid groups responding to the latest humanitarian crisis in the Syrian conflict.

Tens of thousands of civilians have fled Raqa and its surroundings since the US-backed Syrian Democratic Forces (SDF) began its operation to capture the jihadist stronghold last year.

But new waves of displacement are expected as the battle inside the city progresses.

A key problem is getting aid supplies to the relatively remote desert region in Syria's north, with just a trickle of assistance currently crossing from neighbouring Turkey and Iraq.

"There is supply but it's very, very limited and the needs of the population are very high," said Puk Leenders, emergency coordinator for northern Syria for the group Doctors Without Borders (MSF).

Turkey considers the key Kurdish component of the SDF a "terrorist" group and its border with the area north of Raqa is effectively closed.

The border crossing with Iraq, over 300 kilometres (180 miles) east of Raqa city, is open to goods, but in practice sees little traffic, local officials say.

The United Nations, which operates inside Syria with government permission, has been able to airlift supplies to the city of Qamishli, northeast of Raqa, from government-held Damascus.

But "this offered limited capacity and was insufficient to meet all needs", said David Swanson, regional spokesman for the UN's Office for the Coordination of Humanitarian Affairs (OCHA).

The UN is now hoping to start transporting aid from Aleppo to Qamishli, a distance of more than 400 kilometres, but the route must first be tested for security, said Swanson.

An estimated 300,000 civilians once lived under IS rule in Raqa, including 80,000 displaced from other parts of Syria before the group seized the city.

Tens of thousands fled Raqa and surrounding areas as the SDF closed in on the jihadist bastion.

The UN estimates more than 169,000 people fled Raqa city and its environs in April and May alone, and thousands of displaced civilians are now living in overcrowded and underresourced camps.

In Ain Issa, 50 kilometres (30 miles) north of Raqa, new arrivals say they are sleeping on the ground, with neither mattresses under them nor tents overhead.

"There are now more than 25,000 people in the Ain Issa camp, which was built with a capacity of 10,000," camp director Jalal Ayyaf told AFP.

"International organisations are providing support, but it's not sufficient for the numbers who are arriving."

MSF's Leenders said up to 800 people were arriving at Ain Issa each day, and many more people were simply sleeping on roadsides or under trees in the countryside north of the city.

"We know that there are many mines and IEDs (improvised explosive devices), there is also the risk of IS attacks and there have been reports of some fleeing civilians being killed by coalition air strikes."

"It is thought up to half the population of Raqa could ultimately flee the city and they will still be very vulnerable to mines and IS snipers, as well as air strikes."

And aid groups expect an uptick in wounded arrivals as the fighting intensifies.

MSF is establishing stabilisation points near the frontline to provide emergency care to keep the seriously injured alive until they reach hospitals.

But there is a severe shortage of qualified medical staff in the region, Leenders said, and medical facilities have also been affected by the fighting.

"Hospitals are being mined and it's really difficult to start those back up because they need to be demined... It can be extremely challenging."

The most difficult problem of all may simply be reaching those in need.

"Many people fleeing... initially end up in locations too close to the frontline for aid agencies to safely respond," said Donohoe.

And others cannot leave at all, with IS reportedly using threats, arrests and violence to prevent civilians fleeing.

Those who do escape risk unexploded ordnance en route, and the threat of being mistaken for fleeing IS fighters by SDF forces or the US-led coalition.

"Either they stay in Raqa, subjecting their children to increased violence and air strikes, or they take them over the frontline, knowing they will need to cross minefields and may be caught in the crossfire."