A car is ablaze in the Palestinian-majority town of Kafr Qasim in central Israel on June 6, 2017. (Israeli police) 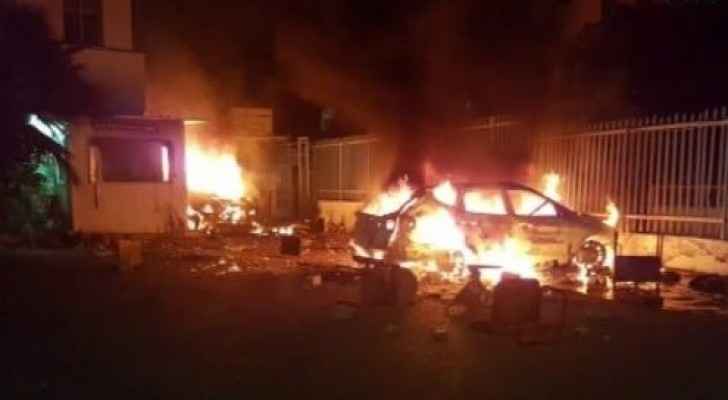 A Palestinian citizen of Israel was shot and killed by Israeli police during clashes in the Palestinian-majority town of Kafr Qasim, central Israel, on Monday night.

The protester was identified as 21-year-old Muhammad Taha, according to Israeli police spokeswoman Luba al-Samri. His father, Mahmoud, told Ynet, "My son was murdered. Lately the police's finger is very light on the trigger, and they shoot quickly, especially when it comes to an Arab."

According to Israeli police spokesman, Micky Rosenfeld, private security guards fired towards the protestors “as a result of a life-threatening situation.”

However, Taha’s father has rejected the police's claims, saying his son "did not pose a danger at all. (Even) if he did, they should have shot him in the leg, not three times in the head. (The security guard) shot to kill, not to (defend himself)."

Clashes in Kafr Qasim reportedly erupted shortly before midnight, when police detained a local man for questioning. Local youth allegedly threw stones at the police officers during the detention, and a “suspect” was also detained.

According to local news outlet Arab48, police officers fired tear gas, stun grenades and rubber-coated steel bullets at the crowd. Official Palestinian news agency Wafa reported that Taha and another Palestinian citizen of Israel were both injured during by gunshots, and Taha later died in hospital.

The Arab Higher Committee of representatives of Palestinian citizens of Israel held Israeli authorities responsible for the violence, Wafa reported on Tuesday. They called for a general strike in all Palestinian-majority towns in Israel on Wednesday, and protests on Thursday and Saturday.

The committee slammed Israel’s “negligence” of Palestinian-majority towns, which has seen a rise in organised crime and murder cases, and called for the resignation of the Israeli chief of police and of Minister of Public Security Gilad Erdan.

Palestinians with Israeli citizenship have long complained of discriminatory treatment and racial profiling at the hands of the Israeli police forces. Palestinian-majority areas in Israel have seen an increase in gun violence over recent years, where there is a disproportionate lack of policing compared to Jewish-majority neighborhoods.