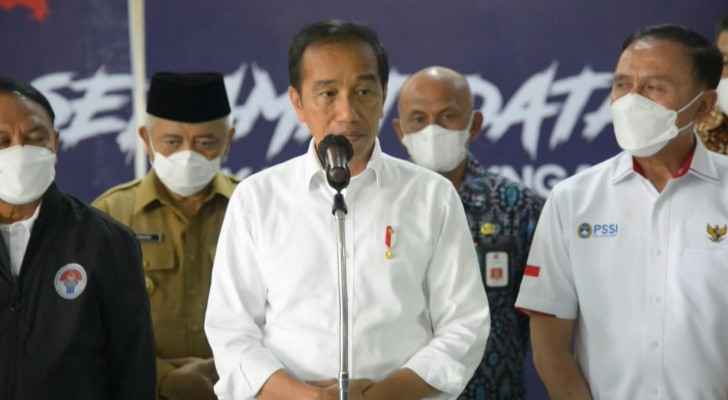 Indonesian President Joko Widodo said Wednesday he would order an audit of all football stadiums in the country, vowing to find the "root" cause of one of the deadliest disasters in the sport's history.

He was in the city of Malang to visit relatives of the victims and those wounded in a stampede that killed at least 131 people on Saturday, and to see the stadium where the tragedy took place.

The Indonesian leader's trip came as anger grew over the police response to a pitch invasion during which officers fired tear gas into packed stands as fans of Arema FC tried to approach players following their defeat to fierce rivals Persebaya Surabaya.

"I want to know the root of the problem that caused this tragedy so that we can get the best solution," he told reporters outside Saiful Anwar Hospital in Malang.

"I will order the Public Works and Public Housing Ministry to audit all stadiums used for the (football) league," he said.

Widodo added that he had spoken with FIFA president Gianni Infantino on Monday about improving Indonesia's "football management" and possible assistance from the world football governing body.

He had earlier entered the hospital to speak with several wounded patients, saying he told them to "keep up their spirits", and asked them about what happened on the night of the match.

He then traveled to the Kanjuruhan stadium, scene of the disaster.

"We need... improvements in the whole management, management of stadium spectators, time, security. It must all be fully audited so that this tragedy won't happen again," the president said.

Police described the pitch invasion as a riot and said two officers were killed, but survivors accused them of overreacting.

Officers responded with force, kicking and hitting fans with batons, according to witnesses and footage, pushing the spectators back into the stands where many were trampled or suffocated to death after tear gas was fired.

In response to the tragedy, Widodo has ordered all matches suspended, an investigation into what happened, and compensation for victims.

Indonesia's chief security minister said a task force had been created and that the probe would take two to three weeks.

Police said the investigation was focusing on six gates at the stadium using CCTV footage from cameras placed outside them. They said the exits were open but too small for the crowds attempting to pass through them.

But Indonesia's football association spokesperson said Tuesday that some gates which should have been opened 10 minutes before the final whistle remained closed.

They stayed shut "because of late commands" and officers "had not arrived", he told a press conference.

The Malang police chief was replaced Monday, nine officers were suspended and 19 others were put under investigation, according to police.

Witnesses described being shrouded in smoke, their eyes stinging as they rushed for small exit doors. Several said police stood by and refused to help victims.

"The place looked like a mass cemetery. Women and children were piling on top of one another," Eko Prianto, 39, told AFP.

Maike Ira Puspita, the association's deputy secretary-general, told AFP that away fans had been banned due to fears of violence and said the match passed without incident until spectators entered the pitch after the final whistle.

She said the association had sanctioned the club and its officials "due to the... negligence of the whole situation".

But the actions of police were outside of the association's scope, the official said.

"We are not going to go there," she said, refusing to answer questions about their conduct.

Indonesia to demolish football stadium where ....

Indonesia to demolish football stadium where ....