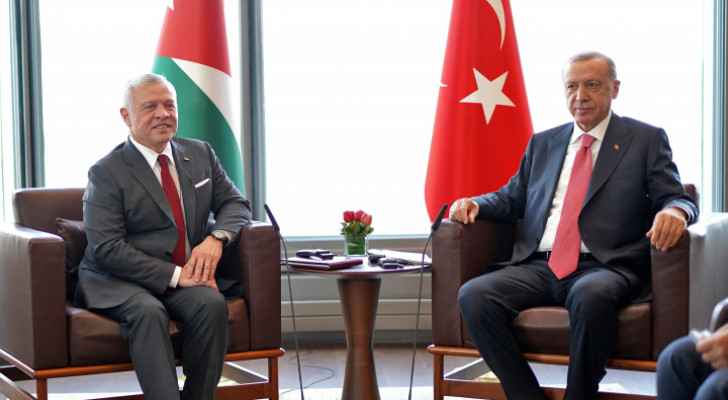 His Majesty King Abdullah and Turkish President Recep Tayyip Erdogan on Tuesday discussed the strong ties between the two countries and means of bolstering cooperation across all sectors.

At a meeting held on the sidelines of the United Nations General Assembly in New York and attended by His Royal Highness Crown Prince Al Hussein bin Abdullah II, King Abdullah highlighted the importance of increasing trade exchange between the two countries.

The meeting covered regional and international developments, and issues of mutual concern, foremost of which is the Palestinian cause, with His Majesty stressing the need to step up efforts towards reaching just and comprehensive peace on the basis of the two-state solution, leading to the establishment of an independent Palestinian state on the 4 June 1967 lines, with East Jerusalem as its capital.

The King said Jordan continues to exert all efforts to safeguard Islamic and Christian holy sites in Jerusalem, in line with the Hashemite Custodianship.

The two leaders discussed the latest developments in Syria, reaffirming the need to maintain international coordination to reach a political solution that safeguards the territorial integrity of Syria and the unity of its people, while guaranteeing the safe and voluntary return of refugees.

Deputy Prime Minister and Foreign Minister Ayman Safadi, and Director of the Office of His Majesty Jafar Hassan attended the meeting.