Charles III to be proclaimed king after vowing 'lifelong service'

Charles III to be proclaimed king after vowing 'lifelong service' 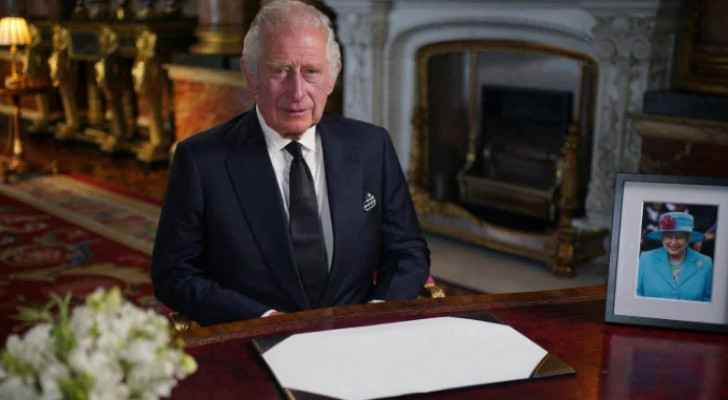 Britain's Charles III will officially be proclaimed king in a ceremony on Saturday, a day after he vowed in his first speech to mourning subjects that he would emulate his "darling mama", Queen Elizabeth II, according to AFP.

The 73-year-old automatically became monarch upon the queen's death Thursday, but an Accession Council ceremony at St James's Palace early Saturday is a constitutional formality to recognise his sovereignty.

Featuring trumpets and a balcony proclamation, the pomp-filled protocol is the latest part of a 10-day programme of official mourning -- which will last even longer for the royals -- held across Britain leading up to the queen's funeral.

An emotional Charles set the tone for his reign in a televised address Friday in which he hailed his mother's "unswerving devotion" during her record-breaking seven decades on the throne.

"Queen Elizabeth's was a life well lived, a promise with destiny kept, and she is mourned most deeply in her passing. That promise of lifelong service I renew to you all today," he said.

The speech dominated the front pages of Britain's newspapers on Saturday, with his heartfelt tribute to his "darling mama" headlining the Daily Telegraph, Daily Express, Daily Mail, The Sun, and Daily Star.

Charles looking pensive as he arrived at Buckingham Palace for the first time as king made the front page image on the Independent, Guardian and The Times, which also carried the words "God Save the King".

The new king also named his elder son and next heir Prince William, 40, as the new Prince of Wales, while expressing love for his younger son Harry and daughter-in-law Meghan.

The move means William's wife Kate assumes the Princess of Wales title once held by his mother and Charles' ex-wife, the late Princess Diana.

Crowds have massed outside Buckingham Palace both to mourn the queen and to wish Charles well, some of them shouting "God Save the King" as he greeted them on his return from Scotland on Friday.

The oldest monarch to ascend to the British throne, he received flowers, cheers and even kisses after travelling from the Balmoral retreat where his 96-year-old mother passed away peacefully.

Earlier, church bells and ceremonial gun salutes for the departed monarch rang out across the United Kingdom as it tries to come to terms with the passing of the only monarch most have ever known.

Charles will be formally proclaimed king by the Accession Council, comprising other royals and political and religious figures including Queen Consort Camilla, Prince William, Prime Minister Liz Truss and the Archbishop of Canterbury.

The centuries-old proceedings will be televised for the first time.

The council will first meet without Charles at 10:00 am (0900 GMT) inside St James's Palace to proclaim him. Then he will join it to make a formal declaration as king and sign official documents.

The "principal proclamation" will be read to the public at 11:00 am from a balcony at St James's Palace -- which sits near Buckingham Palace -- following a fanfare by three trumpeters.

It will then also be read out in Scotland, Northern Ireland and Wales.

As Charles's pre-recorded address was broadcast to the nation, dignitaries attended a remembrance service for his mother at St Paul's Cathedral which saw the first official rendition of the updated national anthem "God Save the King".

"Suddenly you feel that he's his own person," said Barbara Lewis, a retiree from west London who was among several hundred mourners outside the cathedral.

Buckingham Palace revealed Charles and other members of the royal family would observe an extended mourning period from now until seven days after her funeral.

The date of the funeral, which will be attended by heads of state and government, has yet to be officially announced but is expected to be on Monday, September 19.

US President Joe Biden has said he will attend. The Kremlin said Russian President Vladimir Putin will not.

The queen's London palace has become a magnet for thousands of mourners, with flowers piling up in one of many poignant signs of the genuine reverence felt for her.

"She has been our monarch all my life," said Joan Russell, a 55-year-old project manager from northeast London, tears running down her cheeks.

Leading two days of tributes to the queen in parliament, Truss -- only appointed by the late monarch on Tuesday -- offered the nation's support to Charles as she acknowledged the "awesome responsibility" now upon him.

While the government has said there is no obligation on organisations to suspend business during its 10-day mourning period, many are doing so out of respect.

The queen's death comes as the government strives to rush through emergency legislation to tackle the kind of war-fuelled economic privation that marked the start of her reign in 1952.

Elizabeth's public appearances had become rarer in the months since she spent an unscheduled night in hospital in October 2021.

Although smiling, she was visibly thinner and stooped in her last official photographs from Tuesday when she appointed Truss.

The new leader was the 15th prime minister of her reign, which started with Winston Churchill in 1952.

Elizabeth's body is expected to remain at Balmoral before being taken to the Palace of Holyroodhouse in Edinburgh on Sunday.

From the Scottish capital, her coffin is due to travel to London on Tuesday to lie in state for several days.

Officials expect more than one million people to file past the catafalque in Westminster Hall, the oldest part of the UK parliament complex, before the televised funeral service at Westminster Abbey opposite.

The funeral will be a public holiday in the form of a Day of National Mourning.

Charles's coronation, an elaborate ritual steeped in tradition and history, will take place in the same historic surroundings, as it has for centuries, on a date to be fixed.

Queen Elizabeth II came to the throne aged just 25 in a blighted post-war world dominated by political figures from Churchill to Mao Zedong and Joseph Stalin.

In the ensuing decades, the last vestiges of Britain's vast empire crumbled, while at home Brexit shook the foundations of her kingdom.

Her family endured a series of scandals and the death of Diana in a car crash in Paris in 1997, which she was initially seen as responding poorly to.

But throughout, she remained consistently popular and was head of state not just of the United Kingdom but 14 former British colonies, including Australia and Canada.