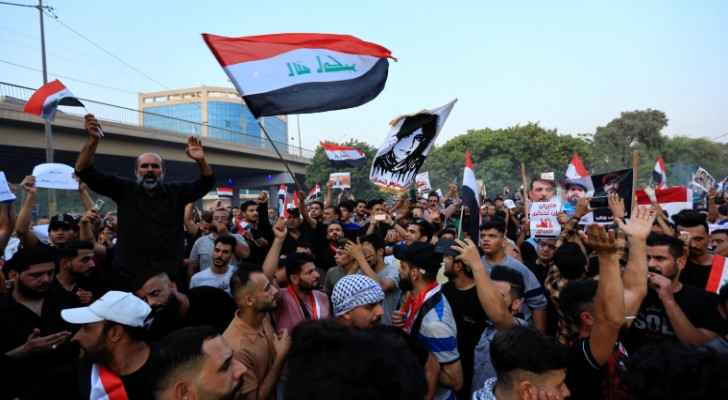 Hundreds of Iraqis demonstrated Friday in Baghdad against the backdrop of a severe political crisis shaking the country, a few days after clashes between Shiite factions resulted in the deaths of 30 supporters of the cleric and politician Muqtada al-Sadr.

The demonstrators carried the Iraqi flags and quietly demanded a change in the political system, as shown by scenes broadcast by Al-Iraqiya Public TV.

Iraq is still without a prime minister and a government since the legislative elections in October 2021, as the Shiite political poles in the country are unable to agree on the name of a candidate for the position.

"The people want the fall of the regime," chanted demonstrators in Al-Nusour Square in Baghdad.

The demonstrators are directing their anger at the political system that, in their eyes, paralyzes Iraq, which is rich in oil, but suffers from a socio-economic crisis.

Some chanted, "Iran will not rule Iraq," rejecting Tehran's "interferences" in Iraqi affairs.

Protesters say they support the protest movement that Iraq experienced in October 2019, when thousands of Iraqis took to the streets to denounce the "corruption" of the ruling class and Iran's hegemony.

This protest movement has receded, but it is still organizing sporadic demonstrations in Baghdad.

Friday's demonstration came against the backdrop of severe tension.

At the beginning of the week, armed confrontations took place in the fortified Green Zone in Baghdad between supporters of Muqtada al-Sadr on the one hand, and the army and the Popular Mobilization on the other, resulting in the death of 30 people in the ranks of the Sadrist movement.

Supporters of the Shiite cleric stormed this area, which includes embassies and ministries, after Muqtada al-Sadr announced his final withdrawal from politics.