Jordanians protest in front of Israeli Occupation embassy in Amman

Jordanians protest in front of Israeli Occupation embassy in Amman 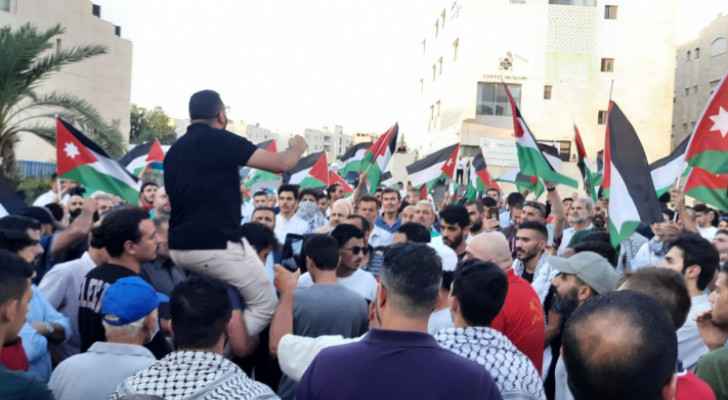 Jordanians called to participate in a vigil Saturday, near the embassy of the Israeli Occupation in the capital, Amman, denouncing the occupation's aggression on the Gaza Strip.

The protesters began arriving on Saturday evening in the courtyard of the Al-Kalouti Mosque in the Al-Rabieh area, as a victory for the people of Gaza, and denouncing the ongoing aggression for the second day in a row.

According to the Palestinian Ministry of Health in Gaza, 15 Palestinians were killed - until six o'clock on Saturday evening - as a result of the raids launched by the occupation aircraft over different areas of the Strip.

The ministry said in a statement that the pharmaceutical situation in the Ministry of Health is in its worst situation in years, as the shortage of essential medicines has reached 40 percent, and 32 percent of medical consumables, and 60 percent of laboratory and blood bank supplies.

The Ministry pointed out that power outages will lead to the suspension of desalination plants, sewage pumps and the supply of water to homes, which may cause a severe health and humanitarian disaster.

It announced the start of the countdown to stopping health services in 72 hours, and that the coming hours are critical and difficult, with the announcement of the halt of the power plant in the Gaza Strip.