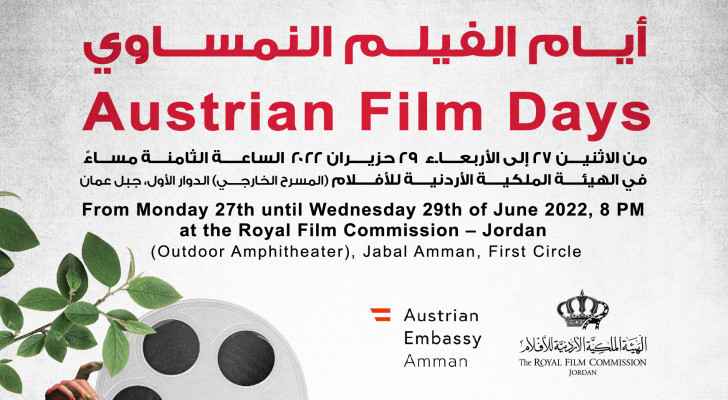 The Austrian Embassy Amman in collaboration with the Royal Film Commission - Jordan (RFC) will launch the first edition of the Austrian Film Days on Monday 27th of June 2022. The event offers a unique opportunity to get to know Austria as portrayed through the work of Austrian filmmakers.

From Monday 27th until Wednesday 29th of June 2022, public screenings (free entry) will take place at the RFC’s outdoor Amphitheater, First Circle at 8:00 PM. The films are in German with English subtitles.

On the first two days, the Austrian Film Days will screen two feature-length movies; On Monday Die Wunderübung “The Miracle Exercise”, a drama directed by Michael Kreihsl, and on Tuesday Kinders “Children”, a documentary directed by Bettina Henkel.

The opening film is a romantic comedy that depicts the life of a married couple who decides to try marriage therapy and then they are given a miracle exercise which changes their lives.

On Tuesday the audience will get the chance to witness a true story portrayed in a documentary that follows children and teenagers of different origins through their sometimes difficult and confusing, sometimes funny and bitter lives.

On the last day, Wednesday, four short films will be screened, that have been qualified for the “Austrian Film Award 2021”, which is part of the “Austrian Short Film Show 2021/22” - a collaboration between the Austrian Federal Ministry for European and International Affairs and the Austrian Film Academy. The short films are: Der Watcher “The Watcher”, by Albin Wildner, Die Waschmaschine “The Washing Machine”, by Dominik Hartl, Das Urteil im Fall K “The Judgement in Case K”, by Özgür Anil, and “Fische “Fishes”, by Raphaela Schmid.