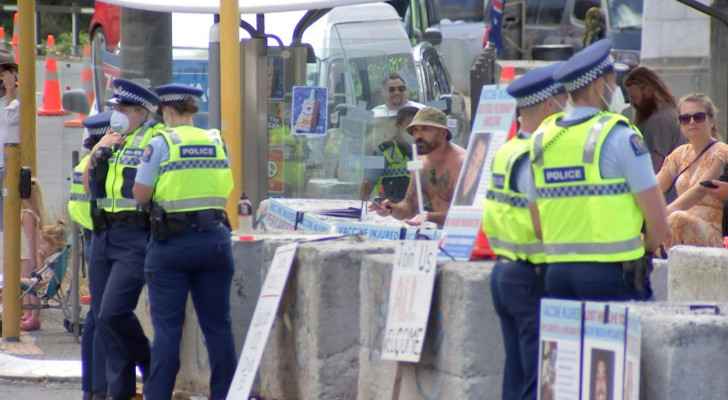 Monday, New Zealand police accused anti-vaccine demonstrators of throwing human waste at them, during a pre-dawn operation to place roadblocks around a protest camp outside Wellington's parliament building.

The protesters took control of the parliamentary grounds and surrounding streets almost two weeks ago, setting up a camp that continues to grow despite police appeals to move on.

The number of vehicles clogging downtown roads almost doubled to 800 over the weekend as more protesters joined the action, inspired by Canada's "Freedom Convoy" trucker protest.

In a bid to prevent further expansion, about 300 police deployed at 3:30am escorting forklifts which were used to place concrete barricades on key roads.

Police said "a large number of vocal protesters were present" and eight arrests were made.

"Seven officers sustained injuries during the operation, ranging from scratches to an ankle injury," they said in a statement.

"Some officers also had human waste thrown over them by protesters."

Police said they would "hold to account" those responsible, pointing out that attempting to deliberately infect someone with a disease can attract a 14-year jail term.

Police have largely taken a hands-off approach to the protest, saying attempts to forcibly clear the camp from parliament would result in violence.

"Police would have to move in using batons, probably using tear gas, to clear that crowd off the grounds -- it's likely to lead to extended confrontation," Commissioner Andrew Coster told TVNZ Sunday.

Coster also said he had been in contact with authorities in Ottawa, where police in riot gear dislodged the trucker protest over the weekend after more than three weeks.

The Wellington protest began as a movement against vaccine mandates but has grown to encompass a range of grievances, with some far-right messaging among the anti-government and anti-media slogans on display.

Wellington residents have complained about being abused for wearing masks, with Prime Minister Jacinda Ardern condemning "bullying and harassment" of residents.

"The protesters have made their point, it is time for them to leave," she told reporters.

Ardern said she would only consider lifting the coronavirus restriction when the current outbreak of the Omicron variant had peaked, not in response to pressure from protesters.

New Zealand reported 2,377 new cases Monday and has reported 53 deaths in a population of five million during the pandemic.