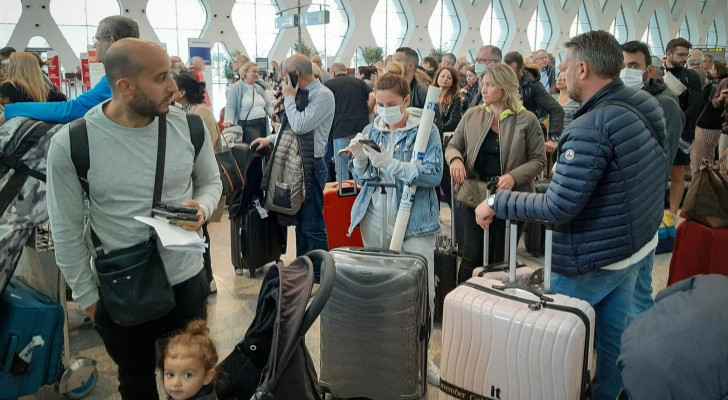 Thursday, Morocco suspended repatriation flights that started last week, thus closing its borders permanently to travelers until the end of the year, in anticipation of the spread of the Covid-19 epidemic, while COVID-19 infections have witnessed a relative increase during the last two days.

Thursday, it was decided to extend the state of health emergency until Jan. 31 in order to "ensure the effectiveness and efficacy of the measures and measures taken (...) to limit the spread of the Covid-19 pandemic," the government said in a statement.

Morocco closed its borders to all international travelers from November 29 to December 31, due to the rapid transmission of Omicron, the new mutant of the coronavirus, and the renewed outbreak of the pandemic in Europe.

After the authorities announced, in the middle of the month, exceptional trips to bring back thousands of Moroccans stranded abroad, they decided to stop these trips starting Thursday. It was only open from Portugal, the United Arab Emirates and Turkey.

Moroccan government spokesman Mustapha Baitas said in a press conference on Thursday that "the circumstances that exist now require the decision to close (...) the government will be forced to relatively tighten the procedures if the situation becomes alarming."

The minister did not provide data on the number of Moroccans who were evacuated from abroad, and those who are still stranded.

After daily infections and deaths from the epidemic remained low since the summer, Morocco recorded an increase of nearly 50 percent in the number of injuries during the past two weeks, according to the Ministry of Health.

The total number of infections since the emergence of the epidemic has exceeded 954,000, of whom 14,823 died, according to the latest official toll on Thursday.

Morocco is betting on closing the borders and the vaccination campaign targeting 80 percent of the population in order to avoid an "epidemic setback, the possibility of which remains very high," as the Ministry of Health warned on Tuesday.

It renewed the call to expedite receiving the vaccine, especially the third dose, which is sluggish in demand (more than 2.6 million people), while more than 22.8 million people benefited from the two doses of the vaccine out of 36 million.