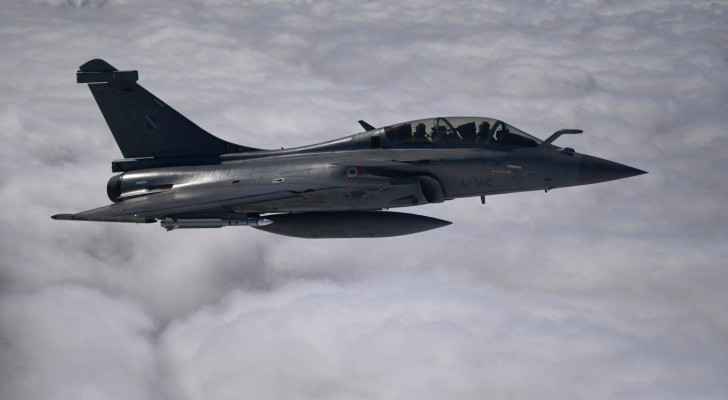 The UAE and France signed a record agreement Friday during a visit by President Emmanuel Macron to Dubai at the start of a Gulf tour that includes Qatar and Saudi Arabia.

The deal includes the purchase of 80 Rafale combat aircrafts by Paris, in addition to the purchase of 12 Caracal helicopters by Abu Dhabi. The value of the two contracts, according to the French presidency, is 17 billion euros, including 14 billion dollars for the Rafale agreement alone.

In a press statement, the French presidency considered it a "great achievement for the strategic partnership between the two countries," stressing the importance of the three French military bases in the wealthy Gulf country.

"This French commitment in the region, this active cooperation in the fight against terrorism, and the clear positions we have taken mean that we have increased our closeness to the United Arab Emirates," Macron said in a statement to reporters.

He continued, "While (the Emiratis) undoubtedly raised more questions about other historical partners, I believe that this (agreement) strengthens France's position," stressing that Abu Dhabi sees France as a "strong partner."

He added that Paris is a partner that "fulfills" its commitments and can be "reliable on."

For his part, Eric Trapier, CEO of Dassault Aviation, the manufacturer of Rafale planes, considered the order "a French success that confirms the strategic relationship that unites our two countries."

The agreement was signed while Macron was holding talks with Abu Dhabi Crown Prince Sheikh Mohammed bin Zayed Al Nahyan at the Expo 2020 Dubai site, at the start of a Gulf tour that will also take him to Qatar and Saudi Arabia.

This order, which will be delivered between 2027 and 2031, aims to replace 60 Mirage 2000-9 aircraft that the Emirates acquired in 1998. It comes after ten years of negotiations launched with the support of former President Nicolas Sarkozy.

Since then, the Rafale has achieved international success despite competition from other American and European aircraft. It now has six foreign customers, in addition to the Emirates, Qatar (36 aircraft), India (36), Egypt (30 new aircraft plus 24), Greece and Croatia.

The UAE ranked fifth among the most important customers of the French defense industries in the period between 2011-2020, with purchase orders worth 4.7 billion euros, according to a report submitted to Parliament on French arms exports.

But in recent years, Paris has been criticized for the use of these weapons in the conflict in Yemen, where Saudi Arabia leads a military coalition that includes the UAE to support the government in confronting the Houthi rebels loyal to Iran, amid accusations of violations that may amount to war crimes.

"France is ashamed of us when we arm authoritarian regimes that despise human rights and whose wealth is based on fossil fuels," said pro-environmental presidential candidate Yannick Gadeau, who was one of the leaders of Greenpeace.

Emmanuel Macron is accompanied by a large delegation of ministers, including Foreign Minister Jean-Yves Le Drian, economy Bruno Le Maire and armies Florence Parly, as well as company chiefs who, in turn, signed a series of agreements with Emirati companies.

The Emirati sovereign fund, "Mubadala," announced pledges worth eight billion euros, including six with the Ministry of Economy, with the aim of increasing its investments in French companies.

In addition, the existing agreement between the Louvre Abu Dhabi and the parent museum in Paris was extended for ten years until 2047, with Abu Dhabi paying 165 million euros for the extension.

Macron arrived in Dubai a day after the Gulf country celebrated its 50th anniversary. Expo 2020, the global event to be organized for the first time in the Middle East, was one of the sites to celebrate the anniversary of the founding of the wealthy country.

Macron's tour will be quick in the Gulf, lasting two days, and after Dubai, he will head to Qatar on Friday evening, and then on Saturday to Jeddah in Saudi Arabia.

During the tour, the main strategic issues in the region are supposed to be discussed: the fight against terrorism and extremism, the Lebanon crisis, the elections in Libya, the Iranian nuclear program, and others.

The Elysee stressed that Macron "continues his commitment" since the start of his presidential term in 2017, which aims to "contribute to the stability" of the region extending from the "Mediterranean to the Gulf."

One of the president's advisors explains that France presents itself as "a balancing force by promoting dialogue with and between the various actors" in the region and as a "main and reliable partner."

Tuesday, Adviser to the Emirati President for Diplomatic Affairs, Anwar Gargash, confirmed that in the face of regional crises, "countries like France have a role to play," explaining that "our positions are very close" on strategic issues.

In Jeddah, Macron will hold an "in-depth meeting" with Saudi Crown Prince Mohammed bin Salman, according to the Elysee.

Macron will be one of the first Western officials to meet with the Saudi crown prince since the diplomatic crisis that followed the murder of Saudi journalist Jamal Khashoggi at his country's consulate in Istanbul in October 2018.

"Who would think for one second that we are helping Lebanon and that we maintain peace and stability in the Middle East if we stop talking to Saudi Arabia, the most populous country and the most important for the Gulf?" Macron said in response to a question about the meeting with the Saudi crown prince.

"This does not mean that I forget (...), but we are working for our country and the interest of the region," he added.