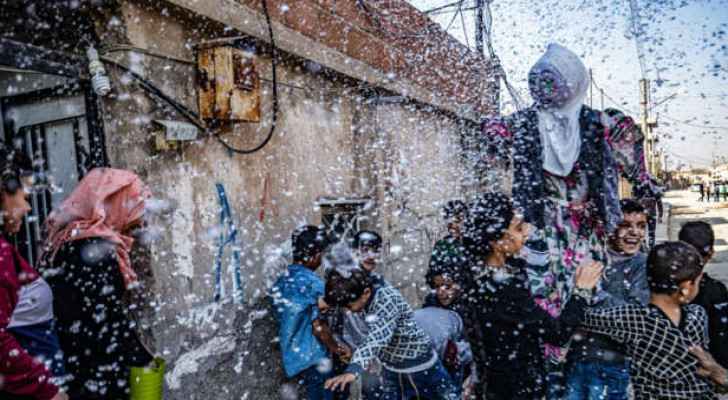 Friday, Syrian Kurds in the northeastern city of Qamishli performed an ancient ritual requesting rain while suffering from a record drop in the rate of precipitation.

The "rain bride" ritual, which has been practiced by the Kurdish community in the region for centuries, is traditionally held during the winter season to ward off drought.

A doll made of wood and colored fabric is paraded through the street and sprinkled with water as people recite a special prayer.

Having largely faded away in recent decades, this custom is re-emerging as drought-affected populations in northeastern Syria face a growing climate catastrophe that threatens their crops and livelihoods.

Farhan Ahmed, 54, a father of five boys and a girl from the village of Hilweh and a resident of Qamishli, where he owns agricultural land, said, "We left it a long time ago and restored it two years ago... I remember when I was seven we used to do it in order for the rain to fall. The time, it was a drought and drought... Now the situation is repeated. The people of the region have returned to these rituals because of the severe drought and drought that the region is exposed to."

In the city of Qamishli, a group of children carried the doll through the streets as neighbors fetched cups of water for the ritual.

An old man sat in front of the window of an empty building and recited a rain prayer.

"When we were young, we used to make the bride like them and start praying, and then we ate," said Haji Suleiman, 71.

"(It) is very difficult... We have entered the middle of winter and it hasn't rained yet," he added.

She continued, "Most of the people are poor, some of them have not entered their homes for five months... Lord, have mercy on us for the sake of these poor people."

'Critical' situation in Jordan amid ....