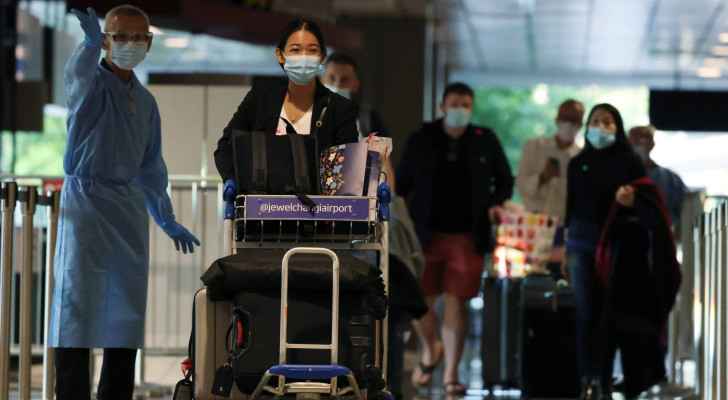 Singapore Tuesday began quarantine-free entry for fully vaccinated passengers from eight countries, part of a plan to ease restrictions as the business hub gears up to live with the coronavirus.

The latest easing expanded a programme that began with vaccinated air travel lanes with Germany and Brunei last month, and is now open to passengers from the United States, Canada, Britain, Denmark, France, Italy, Spain and the Netherlands.

Singapore Airlines said flights under the scheme were scheduled to depart from Amsterdam, London, Los Angeles and New York on Tuesday.
"We have seen very strong demand for our Vaccinated Travel Lane flights," the airline told AFP.

"This is across all cabin classes, as well as various travel segments including leisure, families, and business travel."

Passengers arriving as part of this scheme -- which will include South Korea from November 15 -- will not have to quarantine if they have been fully vaccinated and test negative for the virus before they depart and when they arrive.

To enable families to travel, Singapore has allowed entry to unvaccinated children aged 12 years and under if they are accompanied by someone flying under the scheme.

In the almost deserted tourist district, restaurant manager Raj Samuel said he was optimistic about the potential for more business.
"I think it's an excellent move by the country to help open up the economy... especially for the food and beverage sector," the 36-year-old told AFP.

Kylie Jens, a 29-year-old lawyer from New Zealand based in Singapore, said she was planning to go to Britain for Christmas under the scheme.
"Singapore is just such a small island, it's nice to have a chance to get away and know that that's possible pretty soon," she told AFP.

The city-state initially fought the Covid-19 pandemic by shutting borders, imposing lockdowns of varying intensity and aggressive contact tracing. But with more than 80 percent of the population fully vaccinated, authorities are keen to revive the economy.

"Singapore cannot stay locked down and closed off indefinitely," Prime Minister Lee Hsien Loong said earlier this month when he announced a raft of measures under the "Living with Covid-19" strategy.

The regional offices of thousands of multi-national corporations are in Singapore, which rely on its status as a business and aviation hub for their operations.

The scheme may also provide a shot in the arm for the pandemic-hammered airline and tourism industries, analysts said.

Before the pandemic, tourism accounted for about five percent of Singapore's GDP, said Song Seng Wun, a regional economist with CIMB Private Banking.

"We used to get 1.6 million tourists every month, our airport used to handle over a thousand flights a day pre-pandemic. Now it is just over 300 flights a day," he told AFP.

Statistics from the Singapore tourism board showed international visitor arrivals plunging to less than 2.8 million last year from a record 19.1 million in 2019.

Allowing in travellers without quarantine "instils a bit of fear" in some people, said Singaporean Simon Chow, 22, but added that people need to live with the virus.

"At the end of the day, we're a country that needs travel," he said.