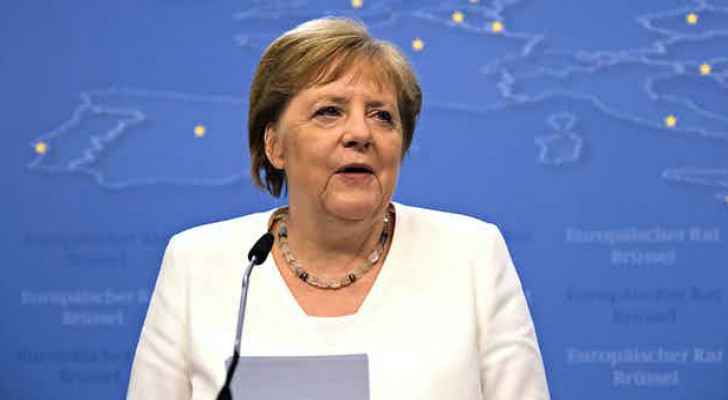 Sunday, German Chancellor Angela Merkel began her last official visit to the Israeli Occupation as part of a farewell tour before her withdrawal from political life after a 16-year era that saw, among other things, the consolidation of relations between Germany and the Israeli Occupation.

The visit was originally scheduled for August, but was postponed in the midst of the withdrawal of US and international forces, including German forces, from Afghanistan after the Taliban movement took control of the country.

After arriving on Saturday evening from Rome, Merkel, during her eighth and final visit to the Israeli Occupation as chancellor, will head to the Yad Vashem Holocaust memorial and hold talks with Prime Minister Naftali Bennett.

Bennett said he would discuss with Merkel "threats and challenges in the region, especially the Iranian nuclear file and the importance of preserving the State of Israel ... and bilateral issues."

The Israeli Prime Minister had recently warned that Iran's nuclear program "crossed all red lines," stressing that the Israeli Occupation "will not allow" Tehran to acquire nuclear weapons.

During her term, Merkel made the Israeli Occupation's right to defend itself against its enemies a priority of German foreign policy in light of her country's responsibility for the Holocaust during World War II.

In January 2020, German President Frank-Walter Steinmeier participated in the commemoration of the 75th anniversary of the liberation of the Nazi camp Auschwitz, warning on that occasion of the return of "old premonitions of anti-Semitism."

Steinmeier mentioned Germany's "guilt," in a speech he gave in Hebrew and English rather than in German out of consideration for the Holocaust survivors participating in the ceremony.

- No visit to Ramallah -

Merkel is not scheduled to visit Ramallah, where the headquarters of the Palestinian Authority headed by Mahmoud Abbas is located in the occupied West Bank, although Germany supports the "two-state solution."

More than 675,000 settlers live in East Jerusalem and the West Bank, which have been occupied by the Israeli Occupation since 1967.

Settlements are illegal under international law.

Despite her outspoken opposition to settlements, Merkel faces criticism from human rights activists who accuse her of not adopting a firm position in this regard.

"It is imperative that the new German government put human rights at the center of its policy regarding Israel and Palestine," said Omar Shakir, an expert on the Israeli Occupation/Palestine at Human Rights Watch.

Merkel is preparing to withdraw from political life as the Social Democrats seek to form an unprecedented coalition in Germany with the Greens and the Liberals, without the participation of the conservatives led by the chancellor.

Merkel stresses that Israeli Occupation's security is a ....