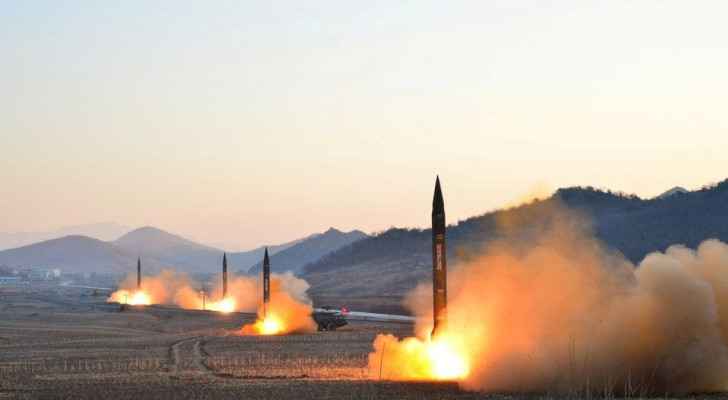 North Korea fired two ballistic missiles into the sea on Wednesday, the South Korean military said, the second such launch by Pyongyang in less than a week.

Analysts said the timing was an unmistakable signal to Beijing- whose foreign minister is visiting Seoul- North Korea's main diplomatic ally and main trade and aid partner, although their relationship is sometimes tense.

South Korea's Joint Chiefs of Staff said in a statement that the nuclear-armed North had launched "two short-range ballistic missiles" from South Pyongan Province toward the sea off its east coast.

It added that the two missiles crossed a distance of about 800 km at a maximum altitude of about 60 km, and "the South Korean and US intelligence agencies are conducting a detailed analysis," without revealing details of the missiles' range immediately.

The launch came as Chinese Foreign Minister Wang Yi is visiting Seoul for talks with his South Korean counterpart.

Speaking before the news broke, Wang expressed his hope that all countries would help "the peace and stability process on the Korean Peninsula," according to Yonhap News Agency.

The UN Security Council has adopted several resolutions banning North Korea from continuing its nuclear weapons and ballistic missile programs, which it says it needs to defend itself against a US invasion.

Pyongyang is also subject to a self-imposed blockade after closing its borders early last year in order to protect itself from the COVID-19 pandemic.

Nuclear talks with the United States have been suspended since the collapse of the 2019 summit in Hanoi between North Korean leader Kim Jong Un and President Donald Trump over the file of sanctions imposed on North Korea, which has a nuclear arsenal, and what Pyongyang can offer in exchange for easing these sanctions.

Kim did not visit China for more than six years after inheriting power from his father, Kim Jong Il, and the relationship between the two allies was tense.

But later, he and Chinese President Xi Jinping met several times, Beijing sees North Korea as a large part of its sphere of influence.

Wednesday's launch "appears to be an indirect message from North Korea and even a request to Beijing to address the issue of the Korean Peninsula as a central issue on China's agenda," said Yang Moo-jin, a professor at the University of North Korean Studies in Seoul.

"At the same time, it seems that Pyongyang is claiming and asserting that North Korea is leading the issue of the Korean Peninsula," he added.

"For example, not only the North, but also other countries that are involved in military activities," he added.

On the other hand, South Korea conducted a successful test launch of a ballistic missile from a submarine on Wednesday, the presidency announced, becoming the seventh country in the world to possess this advanced technology.

An underwater missile was launched from the recently-commissioned submarine Ahn Chang-ho, and over the planned distance before reaching its target, according to the presidency.

The launch in North Korea on Wednesday comes days after its official news agency announced that Pyongyang had successfully test-fired a new long-range cruise missile over the weekend, citing "strategic weapons of great importance."

Pictures published by the Rodong Sinmun newspaper on Monday showed a missile emerging like a fireball from one of the five tubes of a launch vehicle, and a missile flying in a horizontal trajectory.

Analysts said the weapon would represent North Korea's technological advancement in the field of weapons, as it is better able to evade defense systems to launch a warhead through South Korea or Japan, both allies of the United States.

The missiles launched last weekend crossed a 1,500-kilometre path over North Korea and its territorial waters before reaching their target, according to the North's agency.

But the decisions did not prevent it from developing cruise missiles, on which it has conducted previous tests.

North Korea's weapons programs made rapid progress under Kim, but it has not carried out a nuclear test or launched an ICBM since 2017.

On Monday, the US special envoy to North Korea, Sung Kim, proposed in Seoul to meet with representatives of Pyongyang "anywhere and at any time without preconditions."

After meeting with US, Japanese and South Korean envoys to the North in Tokyo earlier this week, Washington representative Sung Kim reiterated, "We hope that the Democratic People's Republic of Korea (North Korea) will respond positively to our outreach efforts and to our proposal to hold a meeting anywhere and at any time." time without preconditions.

He added that the United States was ready to "address humanitarian issues regardless of progress in nuclear disarmament" in line with international standards.

North Korea may face food shortages from August, according ....