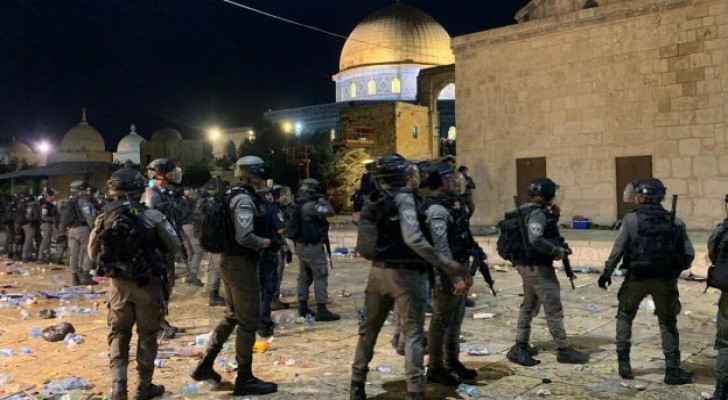 The society indicated one of the injuries, belonged to a young man, Udai Adnan Ghaith, who is the son of the governor of Jerusalem. Ghaith suffered from skull fractures and is currently undergoing surgery.

They added that five civilians suffered wounds as a result of rubber bullets in their eyes, with their injuries being described as serious.

The society pointed out that 45 civilians were wounded by rubber-coated metal bullets in the head, while other injuries were recorded in the upper and lower parts of the body, noting that 88 of the wounded were taken to hospitals for treatment.

Violent confrontations erupted after large forces of the IOF stormed the courtyards of Al-Aqsa Mosque, after the end of the Maghrib prayer.

The IOF closed off several roads, preventing residents from entering Al-Aqsa Mosque to pray and break their fasts.

They also forced the worshipers to leave the Al-Aqsa Mosque, after more than 200 members of the IOF stormed the mosque's courtyards.

The IOF also closed the prayer halls inside Al-Aqsa Mosque with iron chains, using violent force on worshippers such as tear gas and stun grenades.

Previously, the IOF stormed the call to prayer room in Al-Aqsa Mosque and cut off the speaker wires to prevent the Islamic Awqaf figures from communicating with worshippers inside the mosque's courtyards. Additionally, the soldiers attacked journalists to prevent the event from being broadcasted, which led to the injury of the journalists Fayez Abu Armila and Atta Aweissat.

Additionally, the Sheikh Jarrah neighborhood witnessed the arrest of a number of citizens when the IOF suppressed a march peacefully protesting the displacement of its Palestinian residents.

Settlers also attacked participants in a collective Iftar in the neighborhood.