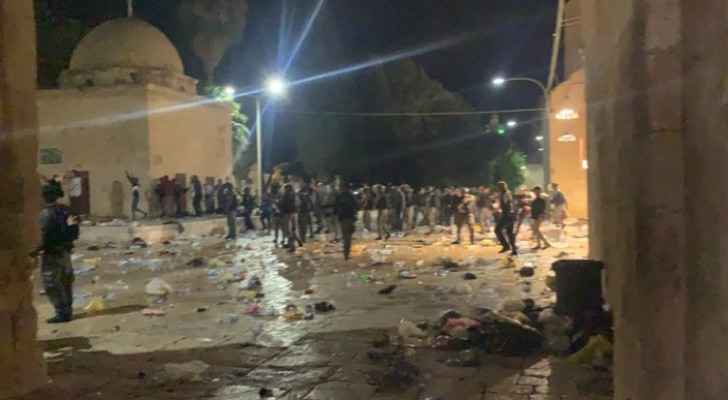 The Ministry of Foreign Affairs and Expatriate Affairs condemned the Israeli Occupation Forces' storming of Al-Aqsa Mosque's courtyard, and the barbaric attack on worshippers Friday.

The ministry’s spokesperson, Ambassador Dhaifallah Al-Fayez, said that storming the courtyard and attacking peaceful worshipers is a blatant and barbaric violation.

We condemn this unacceptable behavior, he said.

Fayez called on the Israeli Occupation authorities to remove all forces from the courtyard immediately and leave the worshippers to freely perform religious rites during Ramadan.

He warned the Israeli Occupation authorities against the consequences of this dangerous escalation and held them responsible for the safety of the mosque and worshippers, calling on them to abide by their obligations as an occupying power in accordance with international humanitarian law and to stop violations, attacks and provocations.

Fayez also condemned the other blatant attacks on Jerusalemites in the vicinity of the mosque, in the Old City, and in the Sheikh Jarrah neighborhood.

Fayez called on the international community to pressure the Israeli Occupation to stop the escalation and violations in all of Palestine, including the Al-Aqsa Mosque, the Old City and occupied East Jerusalem.

Palestinian families are facing orders to evacuate from the Sheikh Jarrah neighborhood, as part of Israeli Occupation settler organizations' continuous efforts to Judaize the area and house Jewish settlers in it, therefore an uptick of violence has been witnessed in recent days.