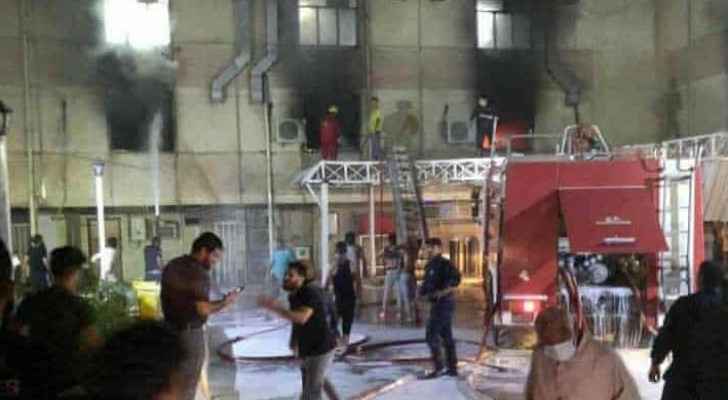 Sunday, Iraq declared a national mourning for a period of three days after at least 82 people were killed in a huge fire that broke out Saturday night in an intensive care unit in a Baghdad hospital.

The ICU was designated to treat Covid-19 patients, according to what the government announced.

The government said in a statement that, following the fire that broke out in Ibn Al-Khatib Hospital, Prime Minister Mustafa Al-Kazemi held an emergency meeting with a number of ministers, security leaders and officials, following which he ordered "to declare mourning for the souls of the martyrs of the accident."

No official agency has issued a death toll, but medical sources told AFP that the disaster, which was the result of an oxygen tank exploding due to improper storage methods, killed at least 82 at least 110.

The government statement quoted Al-Kazemi as saying during the emergency meeting that "I have directed an immediate investigation... to the director of the hospital, the director of security and maintenance and all those concerned until the negligence is found and held accountable."

Al-Kazemi stressed that "negligence in such matters is not merely a mistake. Rather, it is a crime for which all negligent parties must bear responsibility."

The prime minister called for "forming a technical team from all concerned ministries to ensure that safety measures are checked in all hospitals, hotels and public places within one week and in all parts of Iraq," stressing that he issued a "clear directive: every director must personally go down and check safety measures."

Al-Kazemi added, "No one should tell me 'an electrical short.' This is defective ... Check every wire in every public department or hospital, and for any circuit that invokes an electrical call, I will hold everyone accountable."

Al-Kazemi said all those killed in the fire are "martyrs" and granted their families "all the rights of the martyrs."

He also said those wounded would be treated at the state's expense, "including treatment outside Iraq."

At midnight, the Civil Defense announced that its teams had taken control of the fire, noting that "the hospital is devoid of a fire detection and extinguishing system, and "the secondary roofs hastened the spread of the fire because it contained flammable plastic materials."

The Ministry of Health issued a statement saying that it would "announce at a later time the exact position of the numbers of victims and wounded."