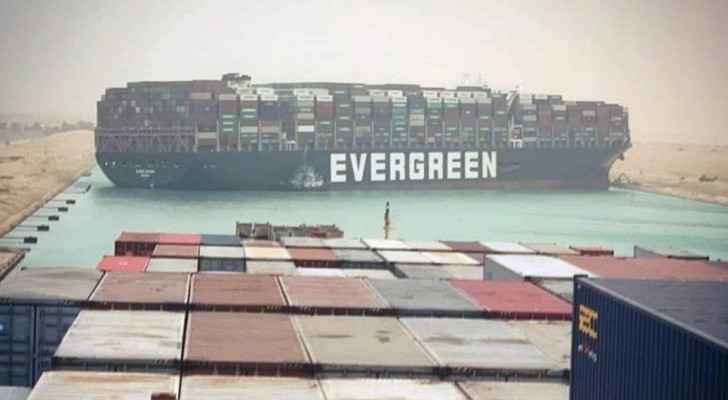 Traffic remains suspended Thursday morning in the Suez Canal after a huge container tanker ran aground, which could slow maritime transport for several days in this main commercial corridor between Europe and Asia.

The accident took place on Tuesday night, and led to a jam of ships and a significant delay in oil supplies and other commercial goods.

The accident led to a rise in oil prices on Wednesday in global markets.

An interactive map of the Vesselvinder site, which specializes in ship traffic, shows that dozens of ships are waiting on both sides of the canal and in the waiting area in the middle. Locomotives sent by the Suez Canal Authority have been trying to move the huge container carrier since Wednesday morning.

It is expected that the accident will slow maritime transport for a period of days, but the economic consequences will remain limited in principle if the situation does not last, according to experts.

"We have never seen anything like this before, but it is likely that the congestion will take several days or weeks to subside, as it will extend its impact on other shipments, schedules and global markets," said Ranjith Raja, in charge of oil research at the US financial data company, Refinitiv.

The "MV Evergiven," which is 400 meters in length and 59 meters in width, with a gross tonnage of 224,000 tons, drifted during a flight from China bound for Rotterdam in the southern side of the canal.

Bernard Schulte Shipmanship (BSM), a Singapore-based company that oversees the ship's technical management, said the 25 crew members were safe. No damage was caused or contaminated to the ship's cargo.

Experts suggested that there were strong winds behind the accident. The Canal Authority also attributed the accident to "the lack of visibility resulting from bad weather conditions due to the country's passing through a dust storm."

The Suez Canal, which links the Red and Mediterranean Bahrain, was opened in 1869. In 2015, Egyptian President Abdel Fattah El-Sisi announced a project to develop the canal aimed at reducing waiting times and doubling the number of ships using it by 2023. To this end, the Egyptians dug in 2014 a new channel that was suspended It has a container ship.

The Suez Canal secures 10 percent of international maritime trade traffic, and forms a link between Europe and Asia.