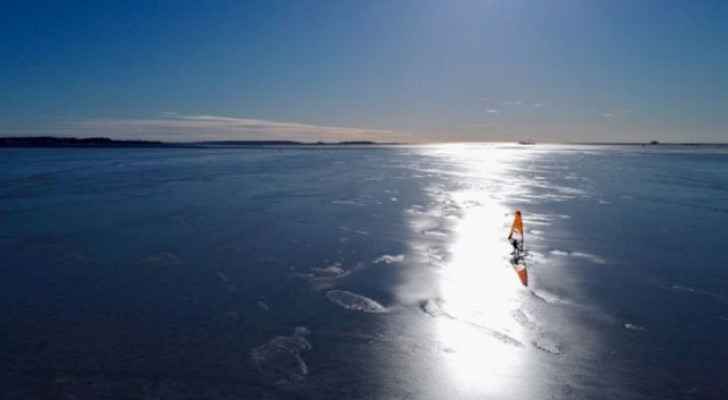 Monday, a group of Finns set out to skate on the frozen sea using sailboards in order to windsurf. By doing so, they were able to reach speeds of up to 100 kilometers per hour.

"I call them happiness machines," Feodor Gurvits told AFP reporters, pointing to his self-made board which sits on three blades and has a windsurfing sail attached.

"They really make people smile, and it's such a joy, pure movement."

Gurvits and around half a dozen fellow ice-surfers are set to cris-cross the Baltic Sea ice off Helsinki's Hernesaari coastline. They will be kitted out in crash helmets and body padding in case the blades slide out during a hard turn.

"It will hurt your hands and you have to have a good grip on the boom, but otherwise it's quite easy on the ice compared to summertime," said another ice surfer Esa Harjula.

Harjula teaches this unique sport and says there has been an increase in demands recently.

The frozen sea ice is currently at 30 centimetres in thickness, meaning it is strong enough to drive a "small truck" on, said Gurvits.

However, he noted that the sunshine and temperatures of five degrees Celsius means that the ice will be shallower along the coastline.

"With a lighter wind you can go much faster than on the water, because there's so much less resistance," mentioned a former windsurfing champion Marianne Rautelin.

Rautelin, who regularly surfs with her husband and daughter, says she cannot choose a favorite between water or ice.

Gurvits estimates around 1,000 people currently practice ice windsurfing, of whom about 20 perform at the top level, mainly spread across the Nordics, Baltics and Poland, as well as the US, Canada and Russia.

Finland, Sweden hand in applications to ....

Finnish president, PM in favor of joining NATO 'without ....

Finnish president, PM in favor of ....