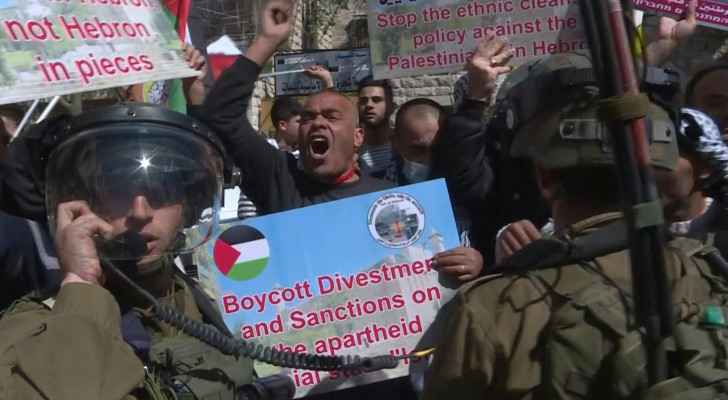 Friday, a number of Palestinians protested in Hebron to mark the 27th anniversary of the 1994 Ibrahimi Mosque massacre, in which a Jewish extremist killed dozens of Palestinian worshippers.

Protesters demanded the end of the Israeli Occupation settlements and the reopening of neighborhoods and streets inside the Old City of Hebron that have been closed since 1994 after the attack.

The Israeli Occupation army used tear gas to disperse the demonstrators and as a result a lot of demonstrators were taken to hospitals after being hit by the tear gas.

"We are here today to denounce the Israeli [Occupation] practices against the Palestinian people in general, and [people of] Hebron in particular," the head of the Palestinian National Initiative movement Mustafa Barghouti told Anadolu Agency.

"We will not forget what happened in the Ibrahimi Mosque 27 years ago, and the crimes of the occupation will not be subject to the statute of limitations," he stressed.

Feb. 25, 1994, during dawn prayer, hundreds of Palestinians were attacked by mass shootings and bombings at the Ibrahimi Mosque in Hebron.

The attack killed 29 worshippers and left dozens of people injured.

Israel to close Ibrahimi Mosque for ....