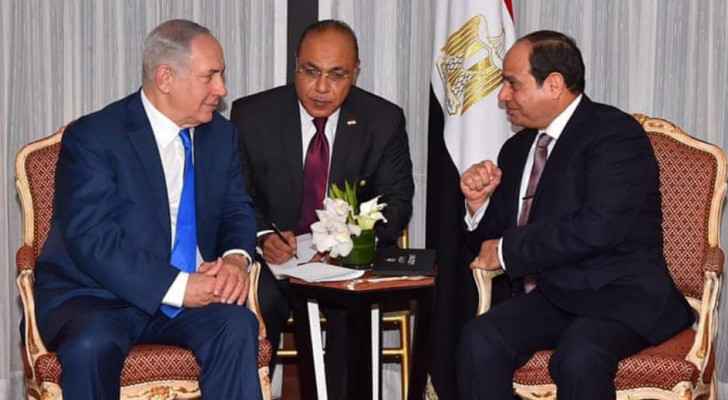 The Israeli Occupation and Egyptian energy ministers agreed Sunday to build a new gas pipeline between the offshore Leviathan field in the eastern Mediterranean and Egypt, with the aim of increasing LNG shipments to Europe, Israeli Occupation sources close to the talks told AFP.

The agreement was announced during the visit of Egyptian Energy Minister Tariq Al-Mulla to Occupied Jerusalem, where he met with Prime Minister Benjamin Netanyahu, Foreign Minister Gabi Ashkenazi and his counterpart Yoni Steinitz.

"We held meetings between our teams with the aim of strengthening cooperation between our two countries in the field of energy, especially with regard to natural gas," the Egyptian minister said in a joint statement.

Sources familiar with the negotiations told AFP that "the two ministers agreed to establish a marine gas pipeline linking the Leviathan gas field with the liquefaction facilities in Egypt."

She added that the aim is to "increase gas exports to Europe from liquefaction facilities in Egypt and thus meet the increasing European demand for natural gas."

After a decade of work and billions of investment, the Leviathan gas field, "the largest energy project in the history of Israel", began in December 2019 with the extraction of the first batches of gas.

In response to a question by France Press, a source familiar with Egyptian-Israeli Occupation negotiations said that he does not know whether the new pipeline will be connected to the Mediterranean Gas Company pipeline or whether the gas will be transported directly from the Leviathan field to Egypt.

On another line, Minister Steinitz and Al-Mulla discussed on Sunday "the supply of natural gas to the Palestinians," according to what Israeli Occupation officials said, at a time when talks are underway through Qatar to supply the Gaza Strip with gas.