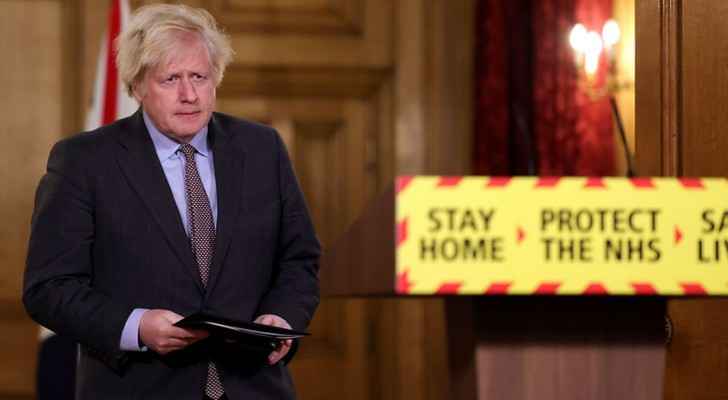 British Prime Minister Boris Johnson said Tuesday that he bears full responsibility for the 100,000 coronavirus deaths in the UK, the largest death toll in all of Europe.

"I deeply regret every soul lost, and certainly as prime minister, I take full responsibility for everything the government has done," Johnson said at a Downing Street press conference.

Johnson expressed his regret for the loss of those lives, saying that "It is difficult to calculate the grief that this gloomy statistic carries."

The British Prime Minister offered his "deepest condolences" to those who lost their loved ones, including "fathers, mothers, brothers and sisters, sons and daughters and many grandparents who passed away due to the pandemic."

Johnson said the virus infection rate remained "extremely high" despite lockdown restrictions that had been in place in England since Jan. 5.

He indicated that he would reveal more details in "the next few days and weeks" about "when and how the country will be reopened again."

With the United Kingdom registering a death toll of more than 100,000 deaths from the Coronavirus, it becomes the smallest country to witness such a grim outcome.

It seems that Britain is ready to issue orders to some travelers coming from abroad to isolate in hotels at their own expense, in an attempt to stop the entry of any new strain of the coronavirus into the country.

Nazem Al-Zahawi, who is in charge of vaccines in Britain, indicated that there would be an announcement of plans to tighten measures at the borders.

The BBC stated that citizens of the United Kingdom and residents coming from most of South Africa and South America, as well as Portugal, will have to isolate themselves in a hotel for 10 days at their own expense.

Quarantine hotels have been used to limit virus transmission in countries such as Australia, New Zealand, China, India and Singapore, but this practice has not been widely adopted in Europe.

Al-Zahawi did not provide details of the planned announcement, but said that tightening border rules was "the right thing to do ... as we vaccinate more of the adult population, if there are new strains like South African or Brazilian, we must be very careful."

The current lockdown rules, imposed to slow the spread of the new strain, were set for the first time in the southeast of England, and prohibit the British from traveling on holidays abroad, although necessary travel is permitted.

People coming from abroad are already being asked to self-isolate in Britain, but implementation is incomplete.\

Also read: Biden to reimpose travel restrictions in US

Britain speeds up vaccine rollout as it prepares to ease ....

Britain speeds up vaccine rollout as it prepares ....

Britain speeds up vaccine rollout as it ....

Britain speeds up vaccine rollout as it ....

Biden, Johnson discuss 'cementing the alliance' between US ....