In Mexico City, residents wait five hours for one hour of oxygen 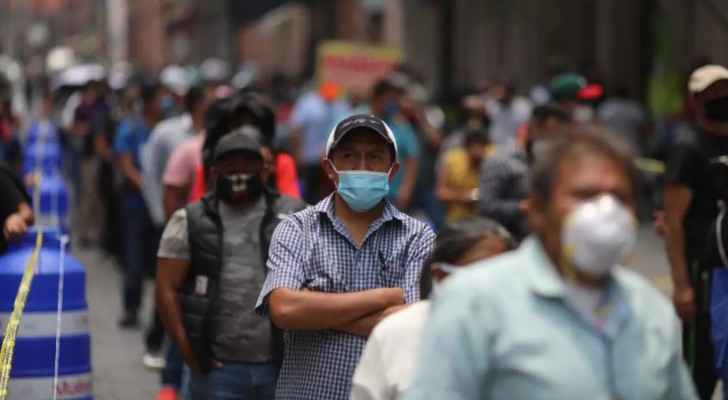 On a street in western Mexico, dozens of people queue to buy oxygen for relatives with COVID-19, and sometimes wait five hours to get a package that sometimes lasts no more than an hour.

Surrendered to the status quo, they approach the door of a private company where an employee collects the packages to write the names of customers on them.

A police patrol passes near the queue, warning those standing by an audio recording, "Alert, alert, we are in a case of a Covid-related emergency!"

Eduardo Martinez, a 33-year-old biochemist, has been waiting in line for about an hour to refill his mother's oxygen bottle, who tested positive for COVID-19 last Tuesday.

The man had expected an increase in cases after the New Year celebrations, but his family took the necessary precautions at that time and bought an oxygen bottle as a precaution.

"Fortunately, I didn't buy anything during December," he told France Presse, and thanks to that, he was able to pay 3,500 pesos ($175) for the Corona test for his 55-year-old mother.

Mexico City, which has a population of nine million, has been under a state of maximum emergency since Dec. 18, with hospital capacity having reached 90 percent due to the rapid increase in the number of cases.

Despite the precautionary measures, the virus swept through Martinez's neighborhood, as he told France Press, where two of his neighbors died recently.

"People are very reckless, reckless, where I live, they don't use masks," he said.

A few meters away from him, Eliana Roith, who came to buy oxygen for her uncle, stops him while he is being transferred from a government hospital, where he feels his condition is not being followed closely, to a private clinic.

The man will be transported in a private car because "there are no ambulances," according to the 23-year-old medical student, who has been unable to follow her classes online during the past four days because she has spent her time searching for drugs and oxygen for her sick relative.

The young woman, who has to pay 200 pesos ($10) to fill a small bottle with oxygen, added, "It lasts for one hour, the time we need to transport it."

With the intensity of the epidemic increasing, "the demand for oxygen increased by 700 percent within a month," as confirmed to France Presse Jes Montaño of the Union of Consumer Advocates. In parallel, fraud and speculation has increased on social media, with oxygen bottles being offered at "exorbitant prices".

He added that although the government provided free oxygen dispensers, "the main problem is the shortage of tanks. There is no way to get them."

At least 20 killed, dozens injured in Mexico City after ....