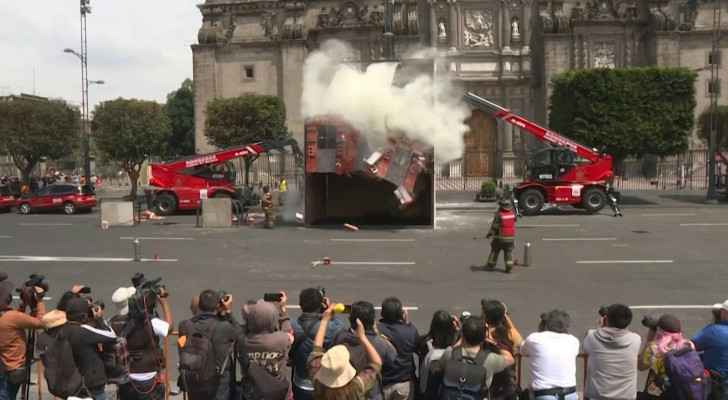 A powerful earthquake struck western Mexico on Monday, leaving at least one person dead and sparking panic hundreds of kilometers away in Mexico City on the anniversary of two devastating tremors.

The quake -- magnitude 7.7 according to the national seismological agency -- shook buildings and sent people rushing out into the streets of the capital.

"I thought I would have a heart attack!" said Gabriela Ramirez, a 58-year-old resident of Mexico City, where many remain traumatized by an earthquake five years ago that killed several hundred people.

"This area is very vulnerable because many buildings that were damaged in the 2017 earthquake have not been repaired, so it's even worse with the fear of being crushed," she added.

One person was killed by falling debris in a shopping center in Manzanillo in the western state of Colima, President Andres Manuel Lopez Obrador said on Twitter.

There was not believed to be any serious damage in Mexico City, he said.

The epicenter was located near the Pacific coast, around 400 kilometers (250 miles) west of the capital and 59 kilometers south of Coalcoman in the state of Michoacan, according to seismologists.

The depth was estimated at 15 kilometers (nine miles).

"It's a terrifying coincidence! Why again today?" Laura Resendiz, 73, said outside the building where she lives in Mexico City.

It was the third major earthquake on record to hit the Latin American country on the day of September 19.

But the timing was no more than a coincidence, the national seismological agency said.

"There is no scientific reason to explain it," it added, leaving some residents searching for other answers.

"It's a very big coincidence! I'm not ruling out that it could be a sign from God," said Federico Garcia, 57.

Mexico City's earthquake alarms rang out less than an hour after the capital held emergency drills as part of events to mark the disasters of 1985 and 2017.

"It felt terrible," Karina Suarez, 37, said after evacuating the building where she lives in the capital.

"When the alarm went off we didn't believe it was real. It's shocking that it shook so hard again today," she added.

In Michoacan, one person was injured by falling glass and there was minor damage to homes and a rural hospital, authorities said.

Some areas of Mexico City suffered power outages, mainly affecting a subway line that had to be evacuated, Sheinbaum said.

The quake triggered dozens of aftershocks, the most powerful of which was magnitude 5.3, according to the national seismological agency.

Mexico sits in the world's most seismically and volcanically active zone, known as the Ring of Fire, where the Pacific plate meets surrounding tectonic plates.

On September 19, 1985 an 8.1 magnitude quake in Mexico City killed more than 10,000 people and destroyed hundreds of buildings.

On the anniversary of that earthquake in 2017, a 7.1 quake left around 370 people dead, mainly in the capital.

Mexico City is built in a natural basin filled with the sediment of a former lake, making it particularly vulnerable to earthquakes.

The capital, which together with surrounding urban areas is home to more than 20 million people, has an early warning alarm system using seismic monitors that aims to give residents enough time to evacuate buildings.

At least 20 killed, dozens injured in Mexico City after ....