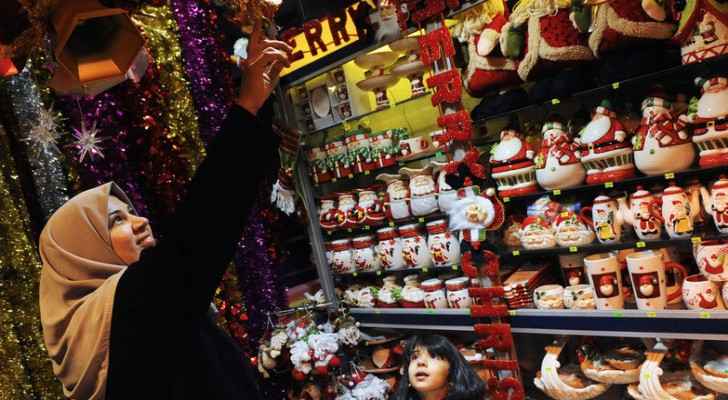 Christmas trees and decorative lights of various colors are offered for sale in a gift shop in the Saudi capital, Riyadh, in a scene that was difficult to imagine even years ago in the conservative kingdom.

These sales began to gradually appear in the kingdom in recent years, in a sign of easing social restrictions after Saudi Crown Prince Mohammed bin Salman pledged to lead a "moderate and free" kingdom from extremist ideas.

The Kingdom prohibits the practice of any religious rites on its territory other than Islamic rites.

"I never imagined seeing this," said a Riyadh resident, who declined to be named, told AFP, "I am amazed."

It was almost impossible to openly sell these goods in Saudi Arabia about three years ago, but the kingdom finally witnessed an end to the role of the Commission for the Promotion of Virtue and Prevention of Vice, which served as a religious police in the country.

For decades, people purchased Christmas items almost in secret, while Christians from the Philippines, Lebanon and other countries celebrated Christmas behind closed doors or in areas where foreigners resided.

In the past, Mary, a Lebanese resident of Riyadh , says it was "very difficult to find similar materials" for Christmas in the kingdom.

"Many of my friends used to buy them from Lebanon or Syria and then secretly bring them into the country," she added.

Crown Prince Mohammed bin Salman undertook major reforms in Saudi Arabia, under which he allowed concerts, reopened cinemas, and allowed women to drive as part of his project to modernize the kingdom.

The manager of the store that sells Christmas decorations in Riyadh, who identified himself only as Omar , confirms that he also sold cosplay costumes in the past on the occasion of Halloween.

It accuses these countries of practicing "systematic, continuous and blatant violations of religious freedoms" or tolerating these practices.