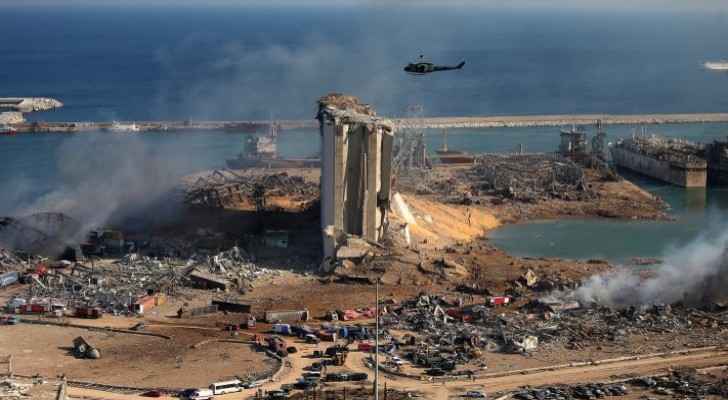 Lebanese authorities signed a contract with German company CombiLift Friday to dispose and transport all hazardous materials stored in the Beirut port.

The materials were discovered following the 'nuclear-style' blast which killed more than 200, injured thousands and destroyed neighborhoods, only to find out they have been stored in the port for over a decade.

The containers had been under supervision of the General Directorate of Customs since 2009. Its existence arose nearly a month after the Aug. 4 explosion, which authorities attributed to the detonation of huge quantities of ammonium nitrate.

The three month contract entails CombiLift to remove all flammable and highly-reactive chemical materials from 49 containers at the port, which caused the mushroom cloud chemical explosion, said the Lebanese caretaker PM Hassan Diab’s office to Reuters.

The Chairman of the Board of Directors and Director-General of the Beirut Port Basim Al-Qaisi said, "If the materials distributed in the heart of the port caught fire, Beirut would have been destroyed," describing the signing of the contract as a "preemptive step."

According to a summary issued by Diab's office, a report prepared by the General Directorate of Public Security concluded that the containers "contain dangerous acidic substances which  are flammable and quick to react with the passage of time."

After the Lebanese government announced the Army was unable to dispose of the materials, the contract with CombiLift was proposed due to the requirement of "expertise and technology that was not available locally", said the Ministry of Works.

The contract value is $3.6 million, of which the port administration will pay $2 million, while CombiLift will bear the remaining $1.6 million, according to Diab and Al-Qaisi's offices.

The public was outraged that it took almost three months to begin hazardous material removal and due to the lack of details and transparency provided by the government in regards to the blast.

“One hundred days after the national tragedy of the Beirut port explosion, one hundred days of investigation engaging serious international expertise and still no clarity, no accountability, no justice” said UN special coordinator for Lebanon, Jan Kubis on Twitter.

Although Diab’s cabinet quit following the port blasts, they are still active within the caretaker role in government.

Viral video of 'rubble in Ukraine' was actually taken in ....

Viral video of 'rubble in Ukraine' was actually ....

Viral video of 'rubble in Ukraine' was actually ....