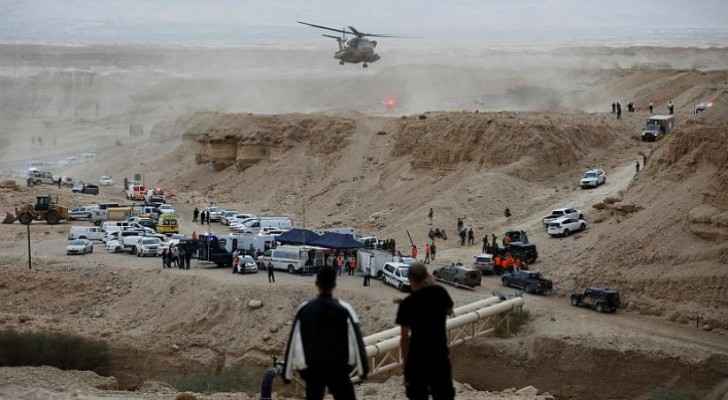 Sunday marked the two year anniversary of the death of 22 individuals, most of whom were children, who were swept away by flash floods in Ain Al-Zara near the Dead Sea October 25, 2018.

The victims were on their way to a field trip in Ma’in Hot Springs when their bus was swept away by flash floods, leading to the drowning of a number of them, according to the government.

A thunderstorm poured heavy rains over the mountains of Madaba, where flash floods roared five kilometers into the Jordan Valley in Dead Sea, sweeping everything in its path, causing mudslides and road blockages.

Civil defense personnel, including aircrafts arrived to search for the missing individuals, succeeding in rescuing 11 people.

It was later announced that the torrents swept away 44 individuals, including 37 students, 7 chaperones and other people who were in the same area.

His Majesty King Abdullah II cancelled plans for an official visit to the Kingdom of Bahrain in order to personally follow up with the rescue operations, which were being supervised by HRH Prince Ali bin Hussien, who was watching closely from the National Centre for Security and Crisis Management (SCM).

According to the previous Minister of Education, Azmi Mahafza, the school had violated the terms and conditions concerning rules and regulations related to ‘school field trips.'

The original destination of the field trip, which was approved by the Ministry, was to al-Azraq. Other destinations, including the hotsprings, were not permitted because of the weather.

The tragedy was extensively investigated and the case was transferred to the Judiciary, which decided on the imprisonment of the school’s Director, and the tourism company which was responsible for the trip, for three years.

However, the ruling did not satisfy the families of the victims, who appealed the ruling to the Amman Court.

Although two years have passed since the incident, the victims' families are still reliving the tragedy every day, says Adnan Abu Sido, father of one of the victims.

Abu Sido confirmed to Roya that the court ruling did not cure the hearts of the deceased’s relatives because it did not remove any of the direct officials responsible for the death of their children.

He was surprised that the school director and the owners of the tourism company were sentenced and that government departments and the ministry were not held accountable.

Tamer Abu Al-Sondos, the father of one of the victims, also considered the decision unfair, demanding that every party responsible for the accident should be held accountable.

Abu Al-Sondos renewed accusations by the victims' families that the water in which their children drowned in, was not rainwater, as was announced at the time, indicating that the documents and information they currently possess confirm this.

He also demanded that their children should officially be named ‘martyrs’.

Abu Al-Sondos also requested to have a street in Amman named after the victims and to have families receive compensation, stressing that many of the injured victims are still receiving expensive treatments.

Memorial service for victims of Dead ....