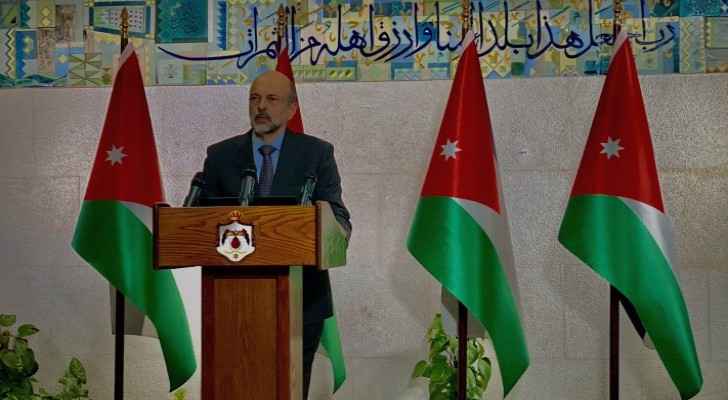 Prime Minister Omar Razzaz has issued this evening the Defence Order (9) under Defence Law No. 13 of 1992.

During a press briefing at the Prime Ministry building, Razzaz said that the government has so far taken 220 decisions to curb the spread of coronavirus in the Kingdom.

Razzaz added that Jordanians set the most striking examples of solidarity and mutual support, noting that "we refused to confront the epidemic with the "herd immunity" that many countries accepted."

"Coronavirus will not end in days or weeks and may take months or more and we have to cope with that. Interdependence is a major address at this stage and we see it in various sectors. We will allow some production facilities to work within conditions and varying numbers of workers. Solidarity is our approach at this stage," Razzaz stated.

"I, ministers and officials made a decision to donate to the "Himmat Watan" fund," Razzaz confirmed.

Razzaz added that the government has put in place an integrated plan to bring back home the Jordanian students abroad.

"We will return our students from abroad and within an integrated plan that takes into account their health and protection. They will come gradually and will be put in quarantine to protect them, their families and the society."

For his part, the Minister of State for Media Affairs, Amjad Adaileh, said that His Majesty King Abdullah II has donated to the Ministry of Health's fund and provided generous financial support for the day laborers program.

He added that the King stressed that protection should always be provided to day laborers in light of the exceptional circumstances the Kingdom is facing.

"His Majesty’s donation was one of the largest during the campaigns that we witnessed during the past two weeks," Adaileh stated.

Adaileh pointed out that the government has put in place social protection programs to help citizens and families affected by the pandemic.