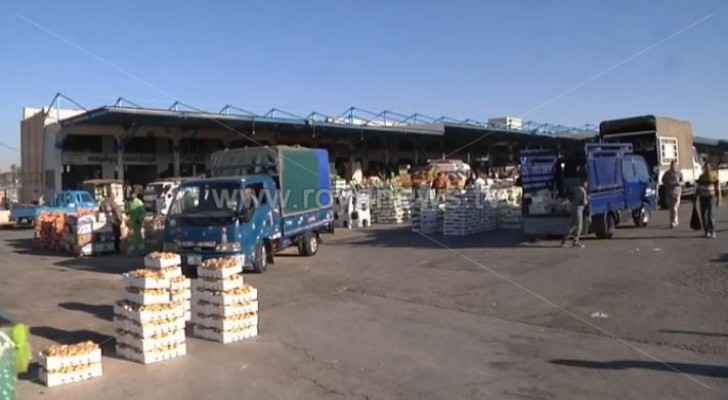 Spokesman for the National Committee for Epidemics Nathir Obaidat has confirmed today that there are coronavirus cases reported in the vegetable market of Kufranjah town, Ajloun, after a vegetable distributor and seller has tested positive for coronavirus.

Obaidat said that the distributor distributes vegetables to sellers at vegetable and fruit markets, which is why the Al-Arda wholesale fruit and vegetable market, the most important shipping point market in the Jordan Valley, was closed until further notice.

The man, who is a resident of Kafaranjah tested positive yesterday after he had direct contact with his infected brother who had returned from the United Kingdom.

Before he tested positive for the virus, the man was asked by the medical staff to stay home as a precaution. However, he insisted on continuing his work as a vegetable seller and trader. He used to go to the Kraimah town in the northern Aghwar in order to get vegetables from the farms.

"Everyone who had direct contact with an infected person should follow all precautions to prevent the spread of the epidemic," Obaidat stressed.

He confirmed that even if the person tests negative, he/she should commit to home quarantine as there is an incubation period for the virus. He added that whenever the person shows symptoms, he/she must inform the medical teams to take the necessary action.

Regarding the health condition of those infected, he said that there are two in the Intensive Care Unit (ICU) and on the artificial respiration, indicating that one of them is recovering.

However, the rest of the cases are in moderate to good health conditions.

Study: Irbid wedding resulted in a ....

Church of Holy Sepulcher to be reopened as of Sunday amid ....

Church of Holy Sepulcher to be reopened ....