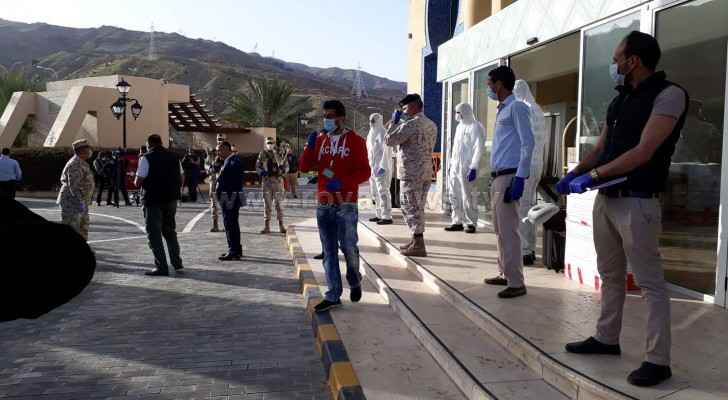 Discharging people quarantined at the Dead Sea and Amman hotels have taken place since early morning, through a proper plan by the National Committee for Epidemics.

The quarantined will be transported via ride-hailing apps vehicles, in coordination with the Land Transport Regulatory Commission (LTRC). The process is being followed by the crisis management operations rooms.

The Committee said in statements that the quarantined will be evacuated from the hotels in two phases, as about 600 people will leave the hotels to the governorates.

Among those quarantined are their Royal Highnesses Prince Hussein and Prince Muhammad, sons of His Highness Prince Talal bin Mohammed. All of those quarantined two weeks ago came from abroad and were immediately taken to the designated facilities. Several of them have tested positive for COVID-19 and are receiving treatment at hospitals.

The Committee also confirmed that it will be checking the quarantined people after they leave the hotels.

Earlier yesterday, the Minister of Health, Saad Jaber, said that the people quarantined won't undergo more medical tests in line with the international protocol. Instead, they will be put in a home quarantine for two weeks.

The Minister warned them of having direct contact with others, urging them to abide by the instructions.