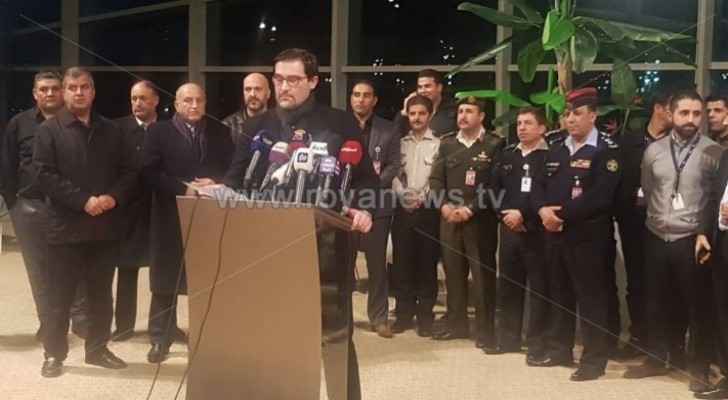 The passengers did not enter the Airport building as a precaution,Acting Health Minister Saleh al-Kharabsheh said.

He added that the Jordanian students will be transferred to al-Bashir Hospital for examination to ensure that they are free from the infection.

Transport Minister Khalid Saif pointed out that there were 55 Jordanian students and 15 Arab nationals on board the Royal Jordanian aircraft, which is the first official carrier of a country to enter the Wuhan Airport for evacuation.

He also lauded the efforts the Ministry of Foreign Affairs and Expatriates exerted to ensure the plane's arrival from China and issuing the necessary approvals.

The Health Ministry's Secretary General, Hikmat Abu al-Foul confirmed that the Jordanian and Arab students are in good health, but that they will be placed in precautionary detention for two days.

They will be received by equipped medical cadres in a hospital, where procedures to ensure their safety were taken, he added.

He said the examination will start on Sunday after the arrival of the necessary equipment, noting that the aircraft will be sterilized over the course of five days.