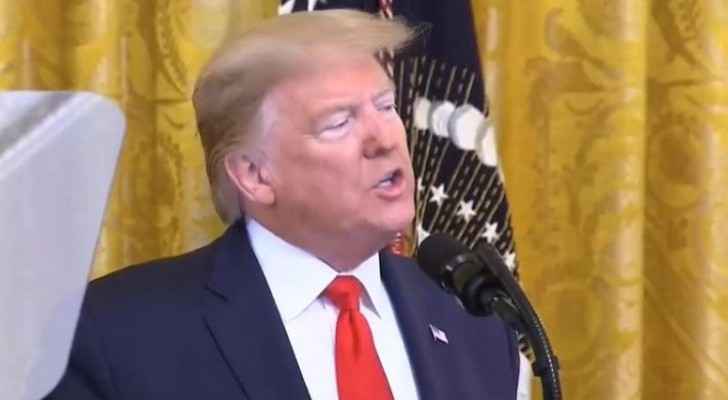 US President Donald Trump has just arrived at the White House to present his plan for the Middle East.

At the beginning of his speech, Trump said the plan he is unveiling represents a big step towards peace in the Middle East.

"Today Israel takes a big step towards peace. Young people across the Middle East are ready for a more hopeful future, and governments throughout the region are realizing that terrorism and Islamic extremism are everyone's common enemy," he said.

"It’s been a very long and arduous process to arrive at this moment. On Sunday I delivered to Prime Minister Netanyahu my vision of peace and prosperity, and a brighter future for Israelis and Palestinians. This vision for peace is fundamentally different from past proposals. In the past, even the most well-intentioned plans were light on factual details and heavy on conceptual frameworks."

The administration’s "vision presents a win-win opportunity for both sides, a realistic two-state solution that resolves the risk of Palestinian statehood to Israel's security," Trump added.

Trump said that on Monday both Netanyahu and Benny Gantz -- Netanyahu's rival in upcoming elections -- both expressed "their support for this effort, proving that the state of Israel is looking for peace and peace transcends politics by any measure."

He joked that Gantz and Netanyahu are engaged in the "longest-running election of all time."

Trump broke with decades of US foreign policy by recognizing Jerusalem as Israel's capital in 2017. The move was praised by Netanyahu but rejected by Palestinian Authority President Mahmoud Abbas.

The final status of Jerusalem has always been one of the most difficult and sensitive questions in the Israeli-Palestinian conflict.

For years, US policy had been to avoid declaring Jerusalem the capital of Israel in the absence of an Israeli-Palestinian peace deal, as the Palestinians also claim Jerusalem as their capital. It was argued that a unilateral decision would break with international consensus and prejudge an issue that was supposed to be left to negotiations.

Trump said he wants his plan to work for the Palestinians as well as the Israelis.

He said the plan "will more than double the Palestinian territory and provide a Palestinian capital in eastern Jerusalem where America will proudly open an embassy."

Trump said, It has to be. Today's agreement is a historic opportunity for the Palestinians to finally achieve an independent state of their very own. After 70 years of little progress, this could be the last opportunity they will ever have.

The plan will also form "a contiguous territory within the Palestinian state," hinging upon Palestinians' "rejection of terrorism."

He added that no Palestinians or Israelis would be "uprooted from their homes."

Trump stressed that his plan would "present no incremental security risk to the state of Israel whatsoever."

"We will not allow a return to the days of bloodshed, bus bombings, nightclub attacks and relentless terror. It won't be allowed," he said.

He continued to say his vision for peace is "fundamentally different from past proposals."

"In the past, even the most well-intentioned plans were light on factual details and heavy on conceptual frameworks. By contrast, our plan is 80 pages and it is the most detailed proposal ever put forward by far," he said.

"As I have seen throughout my long career as a dealmaker, complex problems require nuanced fact-based remedies. That is why our proposal provides precise technical solutions to make Israelis, Palestinians and the region safer and much more prosperous," he added.

"We will work with His Majesty King Abdullah II to ensure that Muslims reach the holy sites in Jerusalem," he confirmed.

For his part, Israeli Prime Minister Benjamin Netanyahu said, "Mr. President, because of this historic recognition and because I believe your peace plan strikes the right balance where other plans have failed, I have agreed to negotiate peace with the Palestinians on the basis of your peace plan."

These are "places recognized by the US as a permanent part of the Jewish state."

He also said Trump had recognized that Israel must have sovereignty in the Jordan Valley.