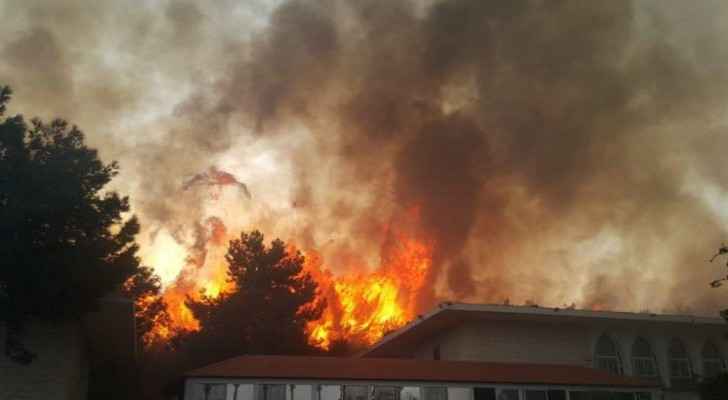 Strong fires have devastated different areas of Lebanon forcing some residents to flee their homes in the middle of Monday night, October 14, 2019, as the flames reached residential areas in villages south of Beirut, Sky News reported.

At least 103 fires erupted in the areas of Meshref and Debbieh in Chouf, where 200 vehicles belonging to the Lebanese Civil Defense helped in extinguishing the fire, Director General of the Civil Defense, Raymond Khattar said.

Fire engines were overwhelmed by the flames, forcing the Interior Ministry to send riot police engines equipped with water cannons to help.

At least four CDD members were transferred to hospitals after suffering from suffocation due to the fires as they were attempting to extinguish them.

The wildfires were described as the worst fires to hit Lebanon in decades.

Since the fire started, Lebanese and people from across the world have taken to Twitter with the hashtag #PrayForLebanon, where people shared videos and photos of the fierce fires.

What a sad morning for #Lebanon today.#PrayForLebanon, it has been on fire since two days, with the country's civil defense services failing to extinguish it#لبنان_يحترق ???? pic.twitter.com/LgFzSIE1nG