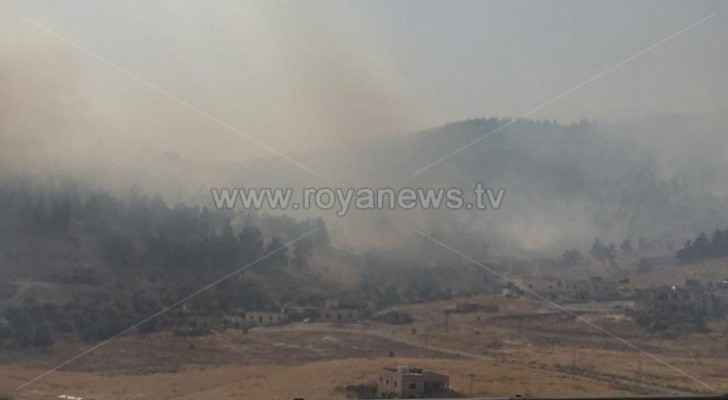 The total number of fires that have affected forested areas in Jordan since the beginning of this summer reached 33 fires, which engulfed 33,500 dunums, the Ministry of Agriculture said in a statement.

Due to the fires, 1,050 forest trees were completely damaged, while 1,940 trees were partially damaged.

Ali Abu Hammour, Secretary-General Assistant for Forestry and Rangelands Department at the, said in a press statement on Thursday, August 22, 2019, that most of the lands that the fires devoured are owned by citizens, except for two lands, where the fires were fabricated.

Abu Hammour explained that the Ministry has developed a plan to deal with the effects of these fires by removing forest trees that were completely burnt, to prevent firewood traders from logging them.

Trees that were partially damaged were cut so that they can recover, Abu Hammour stated.

He pointed out that the Ministry will plant the affected areas, and will be leaving areas where natural reforestation may occur.

Abu Hammour said that there are 1,007,000 dunums of forested lands in the Kingdom equivalent to about 1 % of the area of the Kingdom.

However, forest areas and forests constitute 8% of the area of trees in the Kingdom.

The area of lands with forested trees is about 400,000 dunums, where there are 450,000 dunums of industrial forests in the Kingdom.

Barren forest lands constitute around 259,000 dunums of the Kingdom, where there are 126,000 dunums suitable for agriculture.

Abu Hammour pointed out that the Ministry will be afforesting 3,000 dunams using treated water in Tafilah, Kufranja, Ajloun. It will also be planting 1,000 dunums on the sides of Al-Lajjun Dam.

A memorandum was also signed with the Ministry of Education, the Jordan Armed Forces (JAF) and the gendarmerie to cultivate areas considered as part of them.