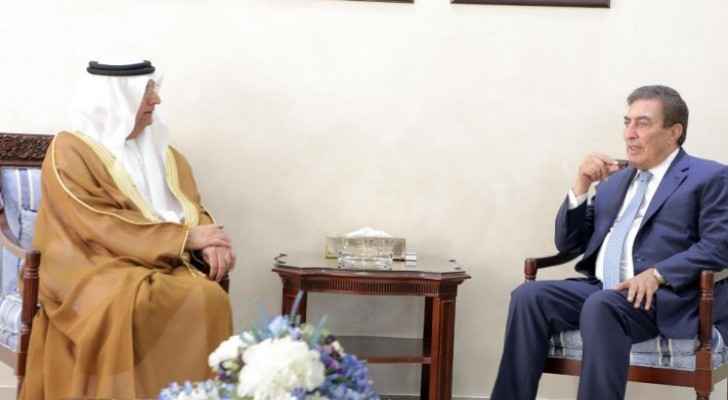 During his meeting with the United Arab Emirates (UAE) Ambassador to Jordan, Ahmed Ali Mohammed Al Baloushi on today, speaker of the House of Representatives and Arab Inter-Parliamentary Union, Atef Tarawneh affirmed the friendly ties between Jordan and the UAE, describing them as sincere and solid.

Tarawneh confirmed that the relations between the two countries, under the leadership of His Majesty King Abdullah II and His Highness Sheikh Khalifa bin Zayed Al Nahyan, have not changed and remained steady and firm.

He expressed Jordan's appreciation for the UAE's continuous support in various fields.

Tarawneh stressed the importance of maintaining coordination and consultation between both countries on various issues of common concern.

He reiterated the importance of the joint parliamentary coordination and the continuous cooperation with President of the UAE Federal National Council (FNC) Dr. Amal Al Qubaisi on various parliamentary issues.

For his part, Balushi expressed the UAE appreciation to the Kingdom under the leadership of His Majesty King Abdullah II and its stances in support of the Arab and Islamic nation's issues.

He also expressed UAE's keenness on Jordanians residing in his country and providing them with the necessary facilities, pointing out that the Jordanian expertise in various fields has a great impact on the UAE development process.