Jordanians mourn death of Aya Aghabi, creator of hope for people with disabilities 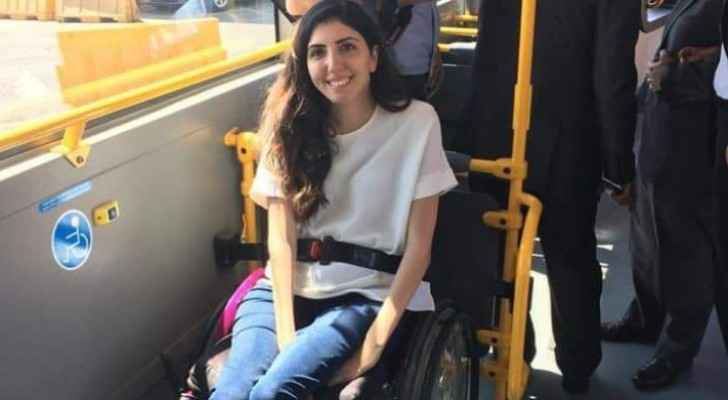 On Monday, August 19, 2019, Jordanians were saddened with the passing away of Aya Aghabi, a young Jordanian girl who is an activist for women’s rights and people with disabilities.

Aghabi is the founder and initiator of "Accessible Jordan" initiative and website, which contains a guide to all outdoor venues and parks that grant access to the disabled.

Aya has spent years helping people with disabilities in Jordan through her initiative, which has long cultivated hope and empowerment for this category of people in the Jordanian society.

She dreamed that Jordan and the neighboring Arab countries will become fully equipped with facilities for people with disabilities.

In previous statements, Aghabi said that following a car accident she had in 2009, she lost her ability to move and transport to places like she used to do before, due to the lack of accessibility for people who use wheelchairs.

This has prompted Aya to take the initiative and strive to look at things from a different perspective, which allowed her to launch her own website to assist people living with similar circumstances.

The late Jordanian girl, Aya Aghabi, succeeded in instilling hope and prospect among many people with disabilities in Jordan.

Jordanians took to social media platforms to mourn the passing away of Aya Aghabi, expressing deep sadness and sorrow following a path filled with hope and helping others.

Following, are some of the social media users' posts, where they expressed their condolences and sorrow:

"The world and our family have lost one of the purest souls..
Aya, you are an inspiration to everyone who has met you or had the pleasure of having you in their lives. You have been so special since the day you were born. I was so happy to have another girl in the family! You were always exceptional in everything you've done...
Your laughs, your stories and your presence will be forever missed.
You have left a legacy behind that no one will ever be able to forget. You worked so hard to make the world a better place and Jordan more accessible...You're in a way better place my darling, you were too good for this life.
Will always love you Ayoosh x"

"What a painful passing away,
Rest in Peace Aya…"

"A symbol of challenge, hope, determination and defending the rights of people with disabilities.

The one behind the remarkable initiative "Accessible Jordan" has passed away.

"The Jordanian young girl, founder of "Accessible Jordan" has passed away.