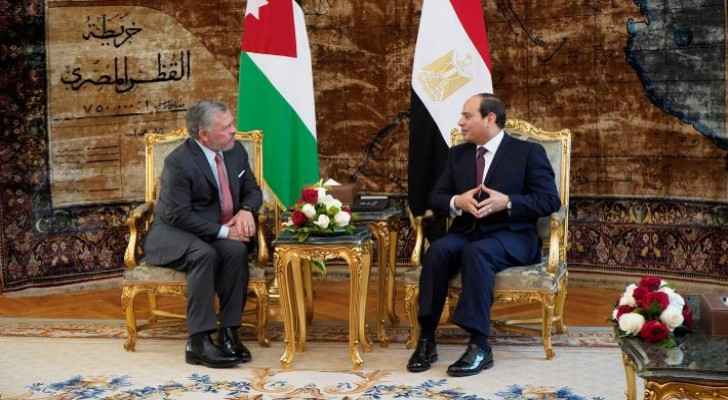 His Majesty King Abdullah and Egyptian President Abdel Fattah El Sisi, during talks in Cairo on Monday, agreed to continue enhancing economic cooperation between the two countries towards mutual prosperity.

Both sides stressed the importance of the Jordan-Egypt higher committee meetings, which most recently convened in Cairo earlier this month, in advancing joint cooperation in various areas.

During talks, King Abdullah and President Sisi reaffirmed the deep historical relations between Jordan and Egypt, highlighting the importance of maintaining coordination on various issues of mutual concern, in order to advance common interests and serve Arab causes.

His Majesty and President Sisi also stressed the importance of supporting joint Arab action and unifying positions on the challenges facing the region.

On regional developments, discussions focused on the Palestinian cause and Jerusalem, with the two leaders underscoring the need to achieve just and lasting peace between the Palestinians and the Israelis.

The King and President Sisi stressed the need to support the Palestinians in gaining their just and legitimate rights to establish their independent Palestinian state on the 4 June 1967 lines, with East Jerusalem as its capital, and in line with the two-state solution and the Arab Peace Initiative.

Moreover, both sides highlighted their rejection of Israeli measures in the Palestinian territories and the recent demolition of dozens of Palestinian homes, which calls for action by the international community to stop these settlement activities.

Talks also covered the latest developments of the Syrian crisis and the need to intensify efforts to reach a political solution that preserves Syria's territorial integrity and the unity of its people.

Current developments in the region and efforts to reach political solutions to regional crises were also discussed, as well as regional and international efforts to fight terrorism within a holistic approach.

President Sisi hosted a luncheon in honour of His Majesty and the accompanying delegation, attended by a number of senior Egyptian officials.

Earlier, the King was accorded an official welcoming ceremony upon arrival at Al Ittihadiya Palace.