Burying the Nakba: How occupation systematically hides evidence of 1948 expulsion of Arabs

Burying the Nakba: How occupation systematically hides evidence of 1948 expulsion of Arabs 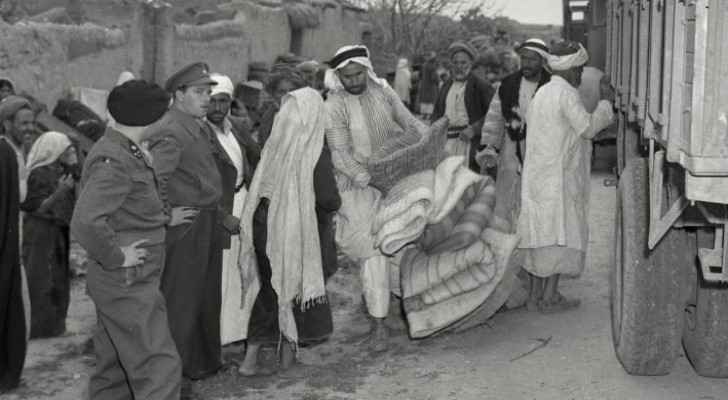 Four years ago, historian Tamar Novick was jolted by a document she found in the file of Yosef Vashitz, from the Arab Department of the left-wing Mapam Party, in the Yad Yaari archive at Givat Haviva. The document, which seemed to describe events that took place during the 1948 war, began:

"Safsaf [former Palestinian village near Safed] – 52 men were caught, tied them to one another, dug a pit and shot them. 10 were still twitching. Women came, begged for mercy. Found bodies of 6 elderly men. There were 61 bodies. 3 cases of rape, one east of from Safed, girl of 14, 4 men shot and killed. From one they cut off his fingers with a knife to take the ring."

The writer goes on to describe additional massacres, looting and abuse perpetrated by Israeli forces in Israel’s War of Independence. "There’s no name on the document and it’s not clear who’s behind it," Dr. Novick tells Haaretz. “It also breaks off in the middle. I found it very disturbing. I knew that finding a document like this made me responsible for clarifying what happened."

The Upper Galilee village of Safsaf was captured by the Israel Defense Forces in Operation Hiram toward the end of 1948. Moshav Safsufa was established on its ruins. Allegations were made over the years that the Seventh Brigade committed war crimes in the village. Those charges are supported by the document Novick found, which was not previously known to scholars. It could also constitute additional evidence that the Israeli top brass knew about what was going on in real time.

Novick decided to consult with other historians about the document. Benny Morris, whose books are basic texts in the study of the Nakba – the "calamity," as the Palestinians refer to the mass emigration of Arabs from the country during the 1948 war – told her that he, too, had come across similar documentation in the past. He was referring to notes made by Mapam Central Committee member Aharon Cohen on the basis of a briefing given in November 1948 by Israel Galili, the former chief of staff of the Haganah militia, which became the IDF. Cohen’s notes in this instance, which Morris published, stated: "Safsaf 52 men tied with a rope. Dropped into a pit and shot. 10 were killed. Women pleaded for mercy. [There were] 3 cases of rape. Caught and released. A girl of 14 was raped. Another 4 were killed. Rings of knives."

Morris’ footnote (in his seminal "The Birth of the Palestinian Refugee Problem, 1947-1949") states that this document was also found in the Yad Yaari Archive. But when Novick returned to examine the document, she was surprised to discover that it was no longer there.

"At first I thought that maybe Morris hadn’t been accurate in his footnote, that perhaps he had made a mistake," Novick recalls. "It took me time to consider the possibility that the document had simply disappeared." When she asked those in charge where the document was, she was told that it had been placed behind lock and key at Yad Yaari – by order of the Ministry of Defense.

Since the start of the last decade, Defense Ministry teams have been scouring Israel’s archives and removing historic documents. But it’s not just papers relating to Israel’s nuclear project or to the country’s foreign relations that are being transferred to vaults: Hundreds of documents have been concealed as part of a systematic effort to hide evidence of the Nakba.

The phenomenon was first detected by the Akevot Institute for Israeli-Palestinian Conflict Research. According to a report drawn up by the institute, the operation is being spearheaded by Malmab, the Defense Ministry’s secretive security department (the name is a Hebrew acronym for “director of security of the defense establishment”), whose activities and budget are classified. The report asserts that Malmab removed historical documentation illegally and with no authority, and at least in some cases has sealed documents that had previously been cleared for publication by the military censor. Some of the documents that were placed in vaults had already been published.

An investigative report by Haaretz found that Malmab has concealed testimony from IDF generals about the killing of civilians and the demolition of villages, as well as documentation of the expulsion of Bedouin during the first decade of statehood. Conversations conducted by Haaretz with directors of public and private archives alike revealed that staff of the security department had treated the archives as their property, in some cases threatening the directors themselves.

Yehiel Horev, who headed Malmab for two decades, until 2007, acknowledged to Haaretz that he launched the project, which is still ongoing. He maintains that it makes sense to conceal the events of 1948, because uncovering them could generate unrest among the country’s Arab population. Asked what the point is of removing documents that have already been published, he explained that the objective is to undermine the credibility of studies about the history of the refugee problem. In Horev’s view, an allegation made by a researcher that's backed up by an original document is not the same as an allegation that cannot be proved or refuted.

The document Novick was looking for might have reinforced Morris’ work. During the investigation, Haaretz was in fact able to find the Aharon Cohen memo, which sums up a meeting of Mapam’s Political Committee on the subject of massacres and expulsions in 1948. Participants in the meeting called for cooperation with a commission of inquiry that would investigate the events. One case the committee discussed concerned “grave actions” carried out in the village of Al-Dawayima, east of Kiryat Gat. One participant mentioned the then-disbanded Lehi underground militia in this connection. Acts of looting were also reported: "Lod and Ramle, Be’er Sheva, there isn’t [an Arab] store that hasn’t been broken into. 9th Brigade says 7, 7th Brigade says 8."

"The party," the document states near the end, "is against expulsion if there is no military necessity for it. There are different approaches concerning the evaluation of necessity. And further clarification is best. What happened in Galilee – those are Nazi acts! Every one of our members must report what he knows."

One of the most fascinating documents about the origin of the Palestinian refugee problem was written by an officer in Shai, the precursor to the Shin Bet security service. It discusses why the country was emptied of so many of its Arab inhabitants, dwelling on the circumstances of each village. Compiled in late June 1948, it was titled "The Emigration of the Arabs of Palestine."

This document was the basis for an article that Benny Morris published in 1986. After the article appeared, the document was removed from the archive and rendered inaccessible to researchers. Years later, the Malmab team reexamined the document, and ordered that it remain classified. They could not have known that a few years later researchers from Akevot would find a copy of the text and run it past the military censors – who authorized its publication unconditionally. Now, after years of concealment, the gist of the document is being revealed here.

The 25-page document begins with an introduction that unabashedly approves of the evacuation of the Arab villages. According to the author, the month of April "excelled in an increase of emigration," while May "was blessed with the evacuation of maximum places." The report then addresses "the causes of the Arab emigration." According to the Israeli narrative that was disseminated over the years, responsibility for the exodus from Israel rests with Arab politicians who encouraged the population to leave. However, according to the document, 70 percent of the Arabs left as a result of Jewish military operations.

The unnamed author of the text ranks the reasons for the Arabs’ departure in order of importance. The first reason: "Direct Jewish acts of hostility against Arab places of settlement." The second reason was the impact of those actions on neighboring villages. Third in importance came "operations by the breakaways," namely the Irgun and Lehi undergrounds. The fourth reason for the Arab exodus was orders issued by Arab institutions and "gangs" (as the document refers to all Arab fighting groups); fifth was "Jewish 'whispering operations' to induce the Arab inhabitants to flee”; and the sixth factor was “evacuation ultimatums."

The author asserts that, "without a doubt, the hostile operations were the main cause of the movement of the population." In addition, "Loudspeakers in the Arabic language proved their effectiveness on the occasions when they were utilized properly." As for Irgun and Lehi operations, the report observes that "many in the villages of central Galilee started to flee following the abduction of the notables of Sheikh Muwannis [a village north of Tel Aviv]. The Arab learned that it is not enough to forge an agreement with the Haganah and that there are other Jews [i.e., the breakaway militias] to beware of.

The author notes that ultimatums to leave were especially employed in central Galilee, less so in the Mount Gilboa region. "Naturally, the act of this ultimatum, like the effect of the 'friendly advice,' came after a certain preparing of the ground by means of hostile actions in the area."

An appendix to the document describes the specific causes of the exodus from each of scores of Arab locales: Ein Zeitun – "our destruction of the village"; Qeitiya – "harassment, threat of action”; Almaniya – "our action, many killed"; Tira – "friendly Jewish advice"; Al’Amarir – "after robbery and murder carried out by the breakaways"; Sumsum – "our ultimatum"; Bir Salim – "attack on the orphanage"; and Zarnuga – "conquest and expulsion."

In order to read the full articles, you can click here.

Israel to displace 36 thousand Palestinians from ....