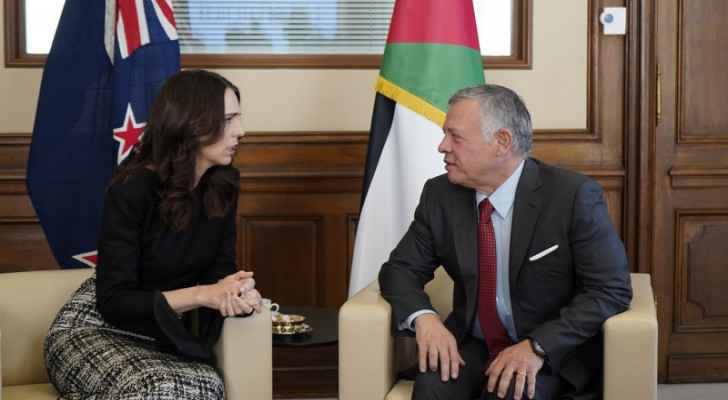 During the meeting, held ahead of a roundtable co-chaired by King Abdullah and Prime Minister Ardern with representatives of global tech companies on countering terrorist and extremist content online, discussions covered the importance of coordinating efforts between the two countries in combating the threat of terrorism, extremism and hate speech.

Discussions at the meeting addressed Jordan’s efforts to counter terrorist and extremist ideologies within a holistic approach, including the Aqaba Process Meetings.

The meeting, attended by His Royal Highness Prince Ghazi bin Muhammad, His Majesty’s chief adviser for religious and cultural affairs and personal envoy, tackled the Aqaba Process round hosted by the United States in partnership with Jordan in February.

The meetings saw the participation of officials from a number of countries, as well as representatives of international organisations and global tech companies, with discussions covering the security threats related to the exploitation of the Internet and technology by terrorists and extremists to spread hate speech and extremist ideologies.

Prime Minister Ardern expressed her appreciation for Jordan’s immense efforts, led by His Majesty, in combating extremist ideology, promoting the values of tolerance and peace, and seeking stability in the region and the world.

The King commended the prime minister’s exemplary leadership in dealing with the aftermath of the Christchurch terrorist attack, which targeted two mosques in the New Zealand city in March, expressing appreciation for the care provided by the government of New Zealand for the Jordanians injured there.