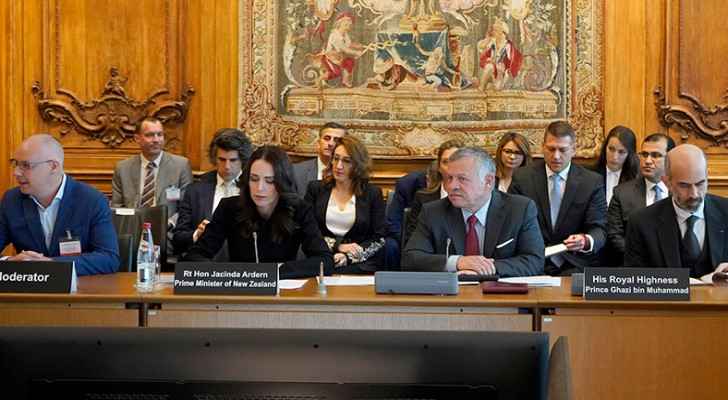 His Majesty King Abdullah and New Zealand Prime Minister Jacinda Ardern on Wednesday in Paris co-chaired a roundtable with executives and representatives of global tech companies to discuss cooperation between governments and companies to counter the abuse of the Internet and tech to promote extremist ideology, hate speech, and terrorism.

The roundtable was held ahead of the high-level meeting on the Christchurch Call to Action to Eliminate Terrorist and Violent Extremist Content Online, hosted by French President Emmanuel Macron and Prime Minister Ardern.

During the roundtable—attended by His Royal Highness Prince Ghazi bin Muhammad, His Majesty’s chief adviser for religious and cultural affairs and personal envoy—discussions covered the importance of cooperation between all stakeholders to counter extremist content and hate speech online, especially in the wake of the terrorist attack that targeted two mosques in Christchurch, New Zealand, on 15 March, killing dozens, including four Jordanian.

Participants in the roundtable stressed the need for joint action and integrated efforts to safeguard the Internet and social media against extremist content and hate speech of any kind, while providing a safe online space for current and future generations.

The roundtable is in line with efforts led by Jordan to enhance coordination and cooperation among various global entities to counter terrorist and extremist ideologies within a holistic approach.

In February, the Aqaba Process round hosted by the United States in partnership with Jordan included the participation of political and security officials from a number of countries, as well as representatives of international organisations and global tech companies, with discussions covering terrorists’ and extremists’ abuse of technology to spread hate speech and extremist ideology online.