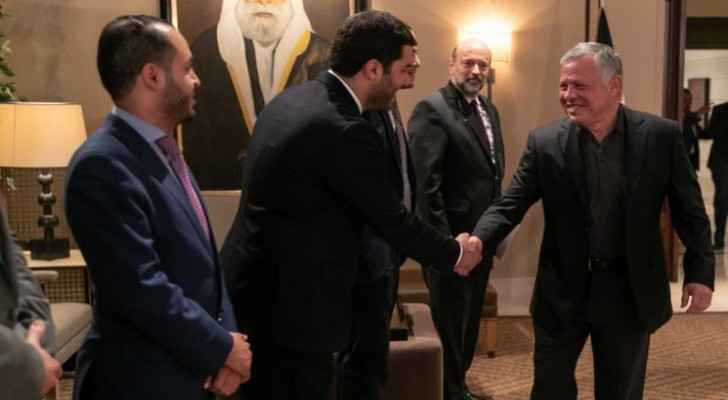 His Majesty King Abdullah met on Sunday with a number of young Jordanian entrepreneurs at Al Husseiniya Palace, to identify suggestions and solutions to enhance entrepreneurship in Jordan.

During the meeting, attended by Prime Minister Omar Razzaz, King Abdullah stressed his support for young Jordanian entrepreneurs, expressing pride in their dedication and enthusiasm.

His Majesty called for unifying efforts to overcome challenges facing the sector, urging an action plan with a clear timeline.

The King also affirmed that creating an investment fund for start-ups is a key step, noting the importance of studying a proposal to establish an entity that deals with issues related to start-ups in coordination with the government.

His Majesty called for enhancing communication and cooperation between the entrepreneurship sector, the government, and relevant entities.

Speaking at the meeting, Prime Minister Razzaz noted that the government is keen on supporting and empowering entrepreneurs, in addition to creating a fund for financing entrepreneurial projects.

He also underscored the importance of reviewing and developing legislation regulating the sector.

His Majesty listened to a presentation prepared by start-up founders that outlined key challenges impeding the growth of the entrepreneurship sector, in addition to suggested solutions and recommendations.

Suggestions included facilitating the financing of start-ups by creating an investment fund, which would enable companies to expand and grow, since access to finance is one of the biggest challenges start-ups face.

The entrepreneurs also noted that establishing an entity that deals with issues related to start-ups, and supporting leading ones, will further enhance the entrepreneurship ecosystem.

Noting that this is His Majesty’s third meeting with representatives of the entrepreneurship sector this month, the attendees said this indicates the King’s immense support for entrepreneurs.

During the meeting, attended by Adviser to His Majesty for Policies and Media Kamal Al Nasser, the entrepreneurs noted that young Jordanians have great potential, and are Jordan’s capital for economic growth, stressing the importance of investing in young innovators at universities.