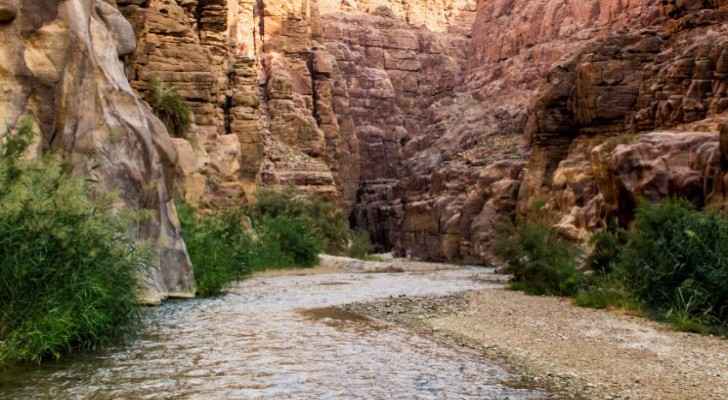 After the rainy season, the Royal Society for the Conservation of Nature (RSCN) reopened on Wednesday, May 1, 2019, the waterways at the Mujib Biosphere Reserve to visitors and tourists.

The Mujib waterways were closed for a longer time and temporarily to ensure public safety following heavy rainfall during winter, while the rest of the Mujib Reserve facilities continued to receive visitors and tourists as usual.

Director of the Reserve, Hisham Dheisat, said that specialized technical teams at the Reserve have completed the providing of public safety tools and renovation of waterways and roads to ensure their safety and continuity of work.

The Siq trail, which begins near the visitors' center in the Mujib Reserve, is the most attractive tourist attraction, where nature and simple adventure travelers walk in a rough way opposite to the waterway between the cliff and the large waterfall base.

The Siq trail contains cold water pools and is ideal for slow walking, especially in summer.

"Stretching 70km from the Desert Hwy to the Dead Sea is the vast Wadi Mujib, proudly called the ‘Grand Canyon of Jordan’. The spectacular chasm is also significant as the historic boundary between the ancient Amorites (to the north) and the Moabites (to the south). Moses is believed to have walked through Wadi Mujib, then known as the Arnon Valley. The King’s Highway crosses the wadi's upper reaches, while its lower reaches fall within the Mujib Biosphere Reserve – normally accessed from the Dead Sea Hwy," according to Lonely Planet.

"The canyon measures 1km deep and 4km wide, but it takes the King’s Highway 18km of the road to switchback down one wall of the wadi, across the dam at the bottom and up the other side. From the picturesque olive groves of the upper plateau, on either side of the wadi, there's no hint of the upheaval that splits the land in two."

Small trees vandalized by unknown people on main road in ....