Report: Increase in number of Jordanians refraining from marriage

Report: Increase in number of Jordanians refraining from marriage 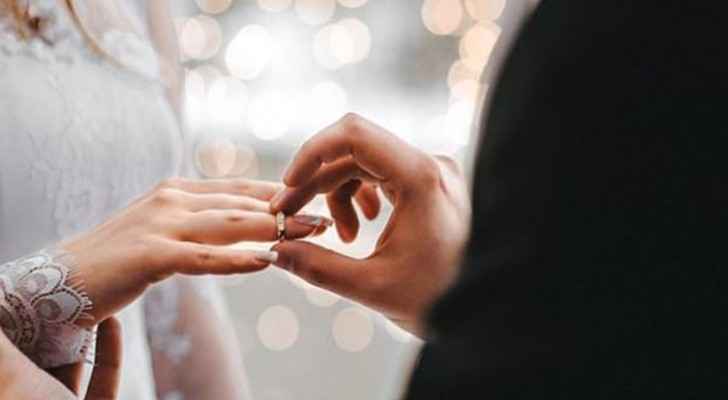 The Jordanian Women’s Solidarity Association Institute (Tadamon) noted that the number of marriages registered in Jordan has decreased relatively in 2018, to reach the same numbers of 2012, amid the apparent reluctance of young people to marry.

The total number of regular and repeated marriages registered at Shari'a courts during 2018 was 70,734 marriage contracts, with a decrease of 9% and a number of 6,966 contracts compared with 2017.

According to “Tadamon,” the decline in normal and repeated marriage during 2018, is an unprecedented decline in the last seven years and has reached the numbers of marriages recorded in 2012.

This confirms that a serious problem is arising that calls for immediate and effective actions to address them, especially when linking the decline of marriages with the unprecedented levels of poverty, unemployment, and demographic and social changes.

The latest indicators show that the average age of first marriages for males has increased to become 32 years, and for females to become 26 years, with a decrease in marriages to 9% in 2018.

“Tadamon” believes that the first marriage high average age for females and males is not a worrying phenomenon given the life expectancy at the time of childbirth. On the other hand, the high rates of poverty and unemployment among males and females, the low participation of women in the economy, and the demographic and social changes all contributed in some way to the reluctance of young men and women to marry.

The high rates of girls' education in Jordan in its various stages indicate that parents prefer to postpone the marriage of their daughters until the completion of their education.

The gender ratio at the time of birth was 112.5 males per 100 females, according to the yearly statistical report for the year 2018 issued by the Department of Statistics.

The figures confirm again that there is a link between the low rate of female unemployment and the low labor force among them. The increase in the number of economically inactive women (women who do not work, seek jobs, are unable to work and are not available for work) has done more or less in lowing the unemployment rate among economically active women (women who work or seek employment), a link that reflects the great imbalance in economic policies and governmental measures and procedures, which led to the reluctance of women to work or seek work, causing and wasting women's economic energies and capabilities which has a negative effect on their future, the future of their local communities and the Kingdom.