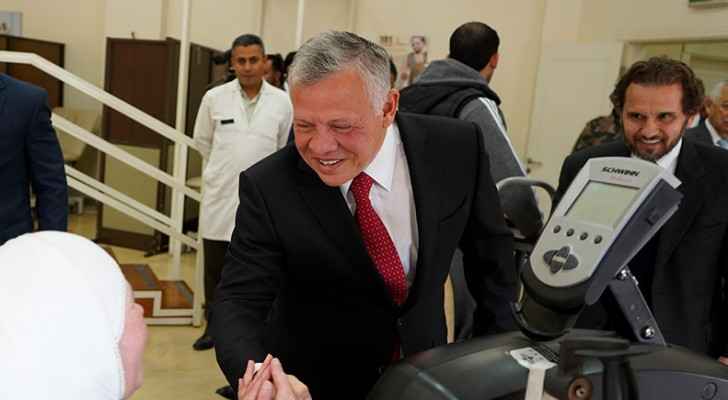 His Majesty King Abdullah on Monday visited the Hashemite Commission for Disabled Soldiers (HCDS) and met with its president, His Royal Highness Prince Mired bin Raad, and members.

King Abdullah commended the services provided by the HCDS for injured servicemen who have sacrificed to defend the homeland, stressing the importance of coordinating with all relevant institutions to support the commission.

Prince Mired thanked His Majesty for supporting injured servicemen and the HCDS, which has become a regional model in quality of services offered to beneficiaries.

During the meeting, attended by a number of injured servicemen, the King was briefed by HCDS Director General Jadallah Masarweh on the commission’s role, services, programmes, and activities for beneficiaries and their families.

The HCDS, which includes 2,150 members, works in coordination with various relevant institutions to serve and rehabilitate beneficiaries, with the goal of reintegrating them into society as productive and employable members and helping them secure job opportunities.

His Majesty toured the HCDS and visited its physiotherapy department, which offers fitness and rehabilitation sessions supervised by therapists from the Royal Medical Services.

The King visited the vocational training department, which offers courses for injured servicemen and their families.