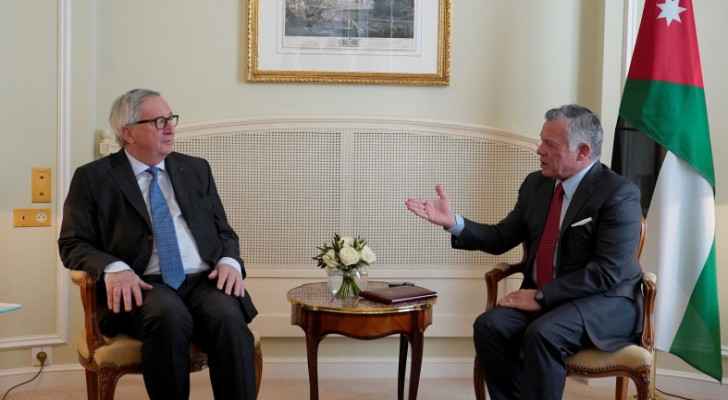 His Majesty King Abdullah’s meeting in Paris on Wednesday with European Commission President Jean-Claude Juncker covered ways to bolster political, economic and trade cooperation between Jordan and the European Union.

During the meeting, held on the sidelines of the high-level meeting on the Christchurch Call to Action to Eliminate Terrorist and Violent Extremist Content Online, King Abdullah expressed appreciation for the European Union’s support for Jordan in vital sectors.

Discussions at the meeting—attended by His Royal Highness Prince Ghazi bin Muhammad, His Majesty’s chief adviser for religious and cultural affairs and personal envoy—covered the importance of Jordan-EU agreements, particularly in the areas of development and economic cooperation.

His Majesty emphasized the importance of utilizing these agreements to support Jordan's efforts towards economic growth and job creation.

Discussing the Palestinian-Israeli conflict, the King stressed the need to reach a just and lasting peace based on the two-state solution that would lead to the establishment of an independent Palestinian state on the 4 June 1967 lines with East Jerusalem as its capital, noting the importance of the European role in this regard.

The meeting also covered regional crises, especially the Syrian crisis and efforts to reach a political solution that preserves Syria’s territorial integrity and the unity of its people.

LTRC warns citizens of dealing with ....