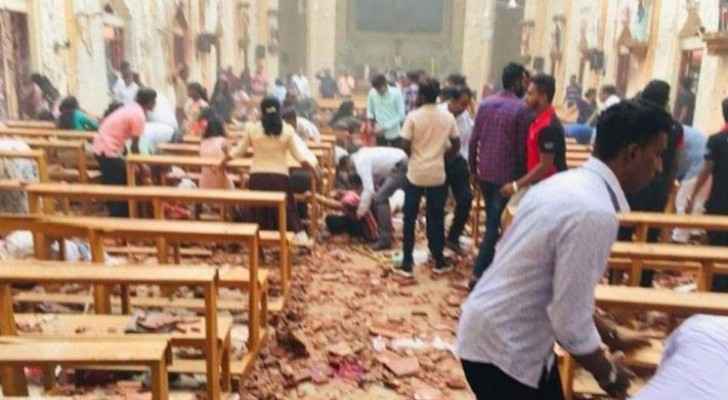 At least 207 people have been killed and 450 others have been injured in a series of Easter Sunday explosions targeting three churches and three hotels in Sri Lanka on early Sunday, April 21, 2019.

The Shangri-La, Kingsbury and Cinnamon Grand hotels, all in Colombo, were targeted, and three churches in Negombo, Batticaloa and Colombo's Kochchikade district were also hit during Easter services.

Hours later, two more explosions took place at a guesthouse in Dehiwala and in Dematagoda, on the outskirts of Colombo.

A senior official told the Associated Press at least two of the blasts were suspected to have been caused by suicide bombers.

Local media are reporting seven arrests have been made following a raid on a house in the capital.

According to the country's junior defence minister, three officers were killed during the raid.

No one has yet said they are behind the attacks, which are the worst violence in the country since Sri Lanka's bloody civil war ended a decade ago.

At St Sebastian's church in Negombo, people carried the wounded away from blood-stained pews after the explosion ripped off the roof and knocked out doors and windows.

The church has appealed for help on its Facebook page.

The Sri Lankan government has declared a curfew with immediate effect and has shut down access to social media and messaging services.

Im really upset with these senseless #bomb attack in tow church over capital.. pray for rescue colombo ???????? Rest In Peace and get well soon
#SriLanka pic.twitter.com/daNeorE0ZC

Sunday mass to be suspended across churches in Amman

Sunday mass to be suspended across ....