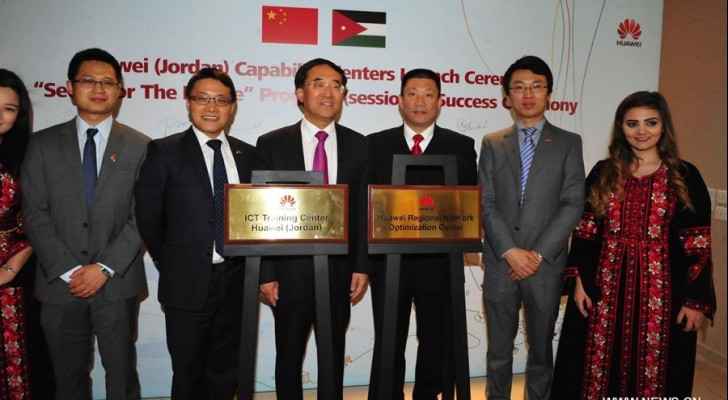 The Rotating Chairman of Huawei Guo Ping's visit to Jordan and his meeting with His Majesty King Abdullah II, while participating in the World Economic Forum considered a step forward to enhancing the company investment in the Kingdom.

The participating also came to reaffirm the compamy's support and commitment for Jordan to become a regional hub for communication and information technology.

Huawei is one of the leading companies in the global ICT sector and one of the first companies to invest in the Kingdom.

It has contributed to providing a supportive environment for the development of the telecommunications sector and providing an infrastructure enabling the Kingdom to take steps to keep on line with developments in the sector.

The company put on the top of its priority to implement the commitments made for His Majesty the King since the first royal visit to the company's research and development center in Shanghai and the subsequent meetings in Beijing and Amman, transferring expertise and providing training for Jordanian engineers and professionals in both vocational and under graduate students.

During the meeting with His Majesty, the chairman reviewed Huawei's achievements in Jordan and developments in the implementation of MoUs between the company and the Jordanian government since 2013, which witnessed the first royal visit to the company's R & D center.

In his statement, Ping affirmed that during the meeting, he discussed the advanced level of cyber security offering by the company in the applications and services it provides in various sectors, including cellular communications, smart city management and other activities.

Huawei ready to continue cooperation with the Kingdom of Jordan to implement the latest technology in the world to enhance Jordan's role as a regional hub in the ICT sector and enable the Kingdom to achieve the objectives of the National Strategic Plan 2025, Ping stressed.

He expressed his confidence in the advanced infrastructure, especially for the ICT sector, which will provide a smooth transition to the fifth generation applications, which is characterized by speeds and high capacities and processing of big data and contribute for better chance for economic growth.

During Ping's visit to the Kingdom, the company signed a MoUwith the Ministry of Communications and Information Technology to collaborate in enhancing the capabilities of young technology workers and leaders in the Kingdom.

The agreement provides training for 3,000 Jordanian students and engineers in three official universities in the north, center and south of the Kingdom, using the latest technology and new technology applied by Huawei in the world, which opening the door to employ more young Jordanians in the region market.

The general manager of Huawei Technologies in Jordan, Zhang Yang, said that the training program in Jordan is one off the biggest programs Huawei implementing outside china is following the success of Huawei in designing a training program for 28 Jordanian engineering students, all of them recruited by international companies operating in the ICT sector .

The company has implemented a number of projects, including the installation of video systems in the governorates of the Kingdom, and training for 50 Technically on the maintenance of mobile devices, and dispatched 25 of officials in information technology from several ministers and departments, and established laboratories in some state owned universities, and dispatched 20 Students within the program Seeds of the future since 2013, he added.